The murder trial of Oscar Pistorius resumed in Pretoria on Monday as the double-amputee athlete took the witness stand for the first time.

The 27-year-old Paralympian is accused of murdering his model girlfriend, Reeva Steenkamp, 29, on Feb. 14, 2013. Pistorius has denied the charge of premeditated murder, maintaining he fired four shots through the bathroom door of his gated-community home after mistaking Steenkamp for an intruder.

Pistorius began by apologizing to Steenkamp’s family and said he was “simply trying to protect” his girlfriend. “I wake up in a complete state of terror,” he said. “I wake up in a panic. I can smell the blood.”

Earlier, his legal team called pathologist Prof. Jan Botha to help assert his innocence. Pistorius was originally due to take the stand first, but owing to a family illness the prosecution permitted Botha’s testimony to be heard instead.

The sensational trial being followed closely around the world had been adjourned for a week after one of the judge’s two aides fell ill.

Pistorius, who gained his “Blade Runner” moniker owing to his distinctive prosthetic limbs, faces 25 years to life in prison if convicted. 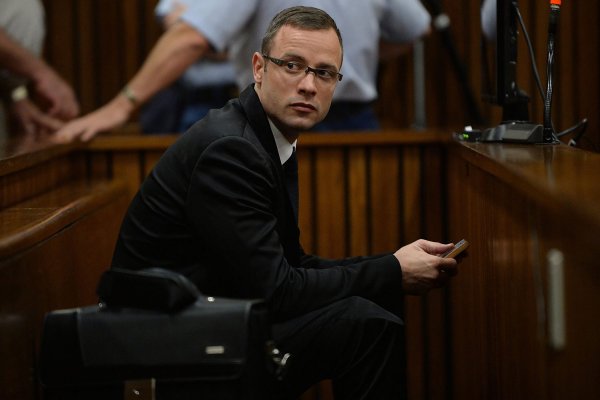 Pistorius Selling Home Where He Killed Girlfriend
Next Up: Editor's Pick