Kim Jong-un's Sister Is Making History at the Winter Olympics. Here’s What We Know About Her

The younger sister of North Korean leader Kim Jong-un made history Friday when she paid an unprecedented visit to South Korea during the opening ceremony of the 2018 Winter Olympics.

Kim Yo Jong, who is believed to be one of her brother’s most trusted aides, smiled and looked on as she attended the widely watched opening ceremony in PyeongChang before meeting with South Korean President Moon Jae-in.

She is the first member of the Kim dynasty to visit South Korea since the Korean War, in a move many experts say may have lasting political implications.

“This is unprecedented in a lot of different ways,” said Clark Sorensen, a professor of international studies who heads the Korea Studies program at the University of Washington. “There’s a lot of speculation as to what the North Korean strategy is right now. The one thing you can say is communication has opened up to the highest levels between the South Korean and North Korean regimes.”

Here’s what we know about Kim Yo Jong.

Kim Yo Jong is a powerful figure in North Korea

Much about Kim Yo Jong is shrouded in mystery, as the Kim dynasty reveals very little publicly, experts say. The dignitary is the vice director of the Workers’ Party of Korea Propaganda and Agitation Department, according to the U.S. Department of Treasury, which added her name to the Specially Designated Nationals List in January 2017. The Treasury Department believes Kim Yo Jong is 28, although some news outlets, including the Associated Press, say she is 30.

Kim Yo Jong serves as a sort of “chief-of-staff figure” for Kim Jong-un and protects his image, according to experts. “She’s the one who watches Kim Jong-un’s back,” Sorensen told TIME.

In October 2017, Kim Yo Jong was named as a member to the Workers Party’s Politburo, the country’s highest political assembly. She is considered the gatekeeper of her brother’s appearances and security, according to Michael Madden, the founder and director of NK Leadership Watch, an analysis website focused on North Korea.

“She has access to anything that goes to Kim Jong-un’s desk. If you want to get a hold of Kim Jong-un and you’re a North Korean, maybe you should befriend Kim Yo Jong,” Madden said.

Kim Yo Jong is the only “full-blooded” sister of Kim Jong-un, who also has half-sisters, according to Sorensen and Madden.

“She is more powerful than all others besides her brother,” Lee said.

Kim Yo Jong made her political debut a few years ago

Kim Yo Jong had remained out of the public spotlight until about three years ago, when she began being photographed beside her brother at official ceremonies. “She made her sort of debut, seen in a political capacity by North Korea media, for the first time in 2014,” Lee said. The Guardian said she was keeping her brother company at the time during elections for North Korea’s Supreme People’s Assembly.

Kim Yo Jong went to school in Switzerland

Before she emerged as a powerful public figure, Kim Yo Jong was largely secluded from the rest of the population as a youngster, according to Lee. She had been sent to study abroad at a school in Switzerland when she was about eight or nine years old, the professor said, although few details are known about her time there.

Kim Yo Jong is reportedly married

Kim Yo Jong reportedly tied the knot in 2014 to Choe Song, whose father is apparently a close aide to Kim Jong-un, according to the Yonhap News Agency, which cited anonymous sources. 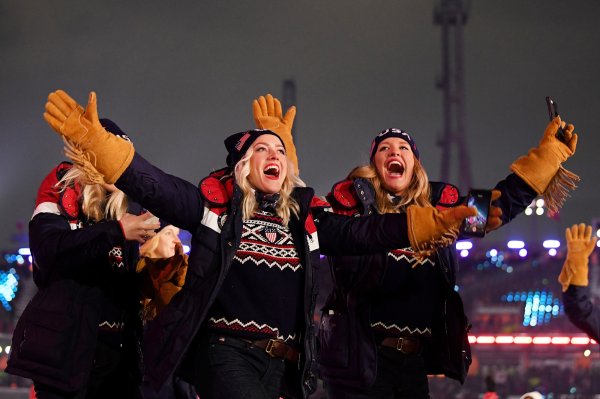 The Internet Has Zero Chill About Team USA's Fringed Gloves at the Winter Olympics Opening Ceremony
Next Up: Editor's Pick