Researchers have developed an ultraviolet (UV) lamp that kills the influenza virus but isn’t harmful to human skin or eyes, according to a new study in Scientific Reports. They hope the technology can be commercialized and marketed to prevent the spread of seasonal flu in public places, such as schools, hospitals, and airports.

“We’ve known for a century that UV light is extremely efficient at killing microbes, bacteria, and viruses,” says study leader David Brenner, director of the Center for Radiological Research at Columbia University Irving Medical Center. For that reason, UV devices are often used for sterilization — for medical equipment in hospitals, for example, or drinking water for backcountry campers.

But conventional germicidal lamps aren’t safe for humans to be around. With prolonged exposure, they can cause skin cancer and cataracts in the eyes. “So up until now, they’re only really practical when people aren’t around,” say Brenner. “You can sterilize a hospital room, but not when anyone’s inside.”

About five years ago, Brenner says, the Columbia team came up with a potential solution. Light on the far end of the UV-C spectrum, known as far-UVC, has very short wavelengths. The researchers suspected that it can penetrate and destroy microscopic bacteria and viruses, but can’t travel through the protective outer layers of human skin or eyes.

“We wanted to get all the benefits of UV light in terms of killing microbes, but none of the health hazards,” says Brenner. Earlier studies, on animals and humans, have shown that exposure to far-UVC light does indeed appear to be safe. “We haven’t seen any biological damage to skin cells or eye cells, whereas with conventional UV light we’ve always seen lots of biological damage,” he says. Previous research has also shown that far-UVC light can kill MRSA bacteria, a common cause of infections after surgery.

Now, Brenner and his colleagues have show that UVC light can effectively kill airborne influenza. In their new study, aerosolized particles of the H1N1 seasonal flu virus were released into a test chamber and exposed to very low doses of far-UVC light. The light inactivated the viruses with about the same efficiency as conventional germicidal UV light, while a control group of bacteria not exposed to light remained active.

“We think that this type of overhead light could be efficacious for basically any public setting,” says Brenner. “Think about doctor’s waiting rooms, schools, airports and airplanes—any place where there’s a likelihood for airborne viruses.” And unlike the flu vaccine, he says, far-UVC light is likely to be effective against all airborne microbes, including newly emerging virus strains.

Brenner says his team is working with a company to develop a commercially available version of the lamp, which could become a cost-effective way to battle flu epidemics on a population level. “The lamp we’re using at the moment costs less than $1,000, and you can imagine that if it were put into general circulation, the price would drop dramatically,” he says. “We don’t see cost as being a limiting factor here.”

UVC lamps could also have potential implications in clinical settings, as well — in the operating room during surgeries, for example. “No matter how well you sterilize a room beforehand, the medical staff can still bring in dangerous bacteria like MRSA,” says Brenner. “If you have a lamp over the surgical site that can sterilize the air, you can prevent the bacteria from floating down and contaminating the wound.”

Brenner can’t predict how long it might take for these lamps to be commercially available, but he says he’s “extremely optimistic” about the technology. “There has been no way of killing viruses in the air in public spaces, and this is an approach that may solve that problem.” 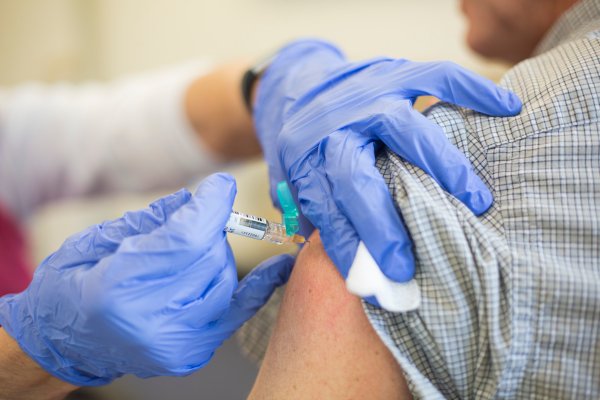 2 Children Have Died From the Flu in New York City
Next Up: Editor's Pick