The tweet, without question, was ill-advised. American speedskater Shani Davis, a two-time Olympic champion in the 1,000-m, took to social media on Thursday to rip United States Olympic officials for naming luge athlete Erin Hamlin as Team USA’s flag bearer for the 2018 Winter Olympics opening ceremonies in PyeongChang instead of him.

America’s eight winter sports federations split their votes 4-4 for Hamlin, 31, and Davis, 35, who’s competing in his fifth Winter Olympics and is the first African-American to make the U.S. speedskating team and the first black Winter Olympian to win an individual gold medal (at Turin in 2006). Procedure called for a coin flip. Hamlin won.

Davis then skipped Friday’s opening ceremony. He said he was always planning on passing on the ceremonies because it conflicted with this training, but he would have showed up to wave the flag.

Poor sport? Bad teammate? Davis was accused of both, and far worse. But he has a valid gripe—and he shouldn’t be made into a pariah. Hamlin, making her fourth Olympic appearance in PyeongChang, became the first American athlete to win an Olympic singles luge medal when she took bronze in Sochi. But Davis is the more decorated performer, with accolades on the track and an important message off of it. His story of sticking with skating growing up in Chicago, even as kids in his neighborhood teased him, inspired many other kids who looked like him to see themselves on the ice. In PyeongChang, Maame Biney and Erin Jackson became the first African-American women to qualify for Team USA in short-track and long-track speedskating, respectively. But ice and snow sports are still overwhelmingly white.

Davis has always operated as a bit of a lone wolf, separating himself from the U.S. Speedskating apparatus in his training, and rarely engaging with the media. He’s also always spoken his mind. After teammate Chad Hedrick criticized him for skipping a team race at the 2006 Olympics, Davis stuck to his principles: he was chasing the individual gold medals, and wanted no distractions on the path to that goal. The strategy worked.

Let’s not pretend that Davis is unique among Olympians in prioritizing his own success. And in PyeongChang, he’s nearing the end of a storied career and no longer a medal favorite. Waving the flag for the United States would have been a fitting recognition of all that he’s meant for the sport—and the nation’s aspiring Olympians. 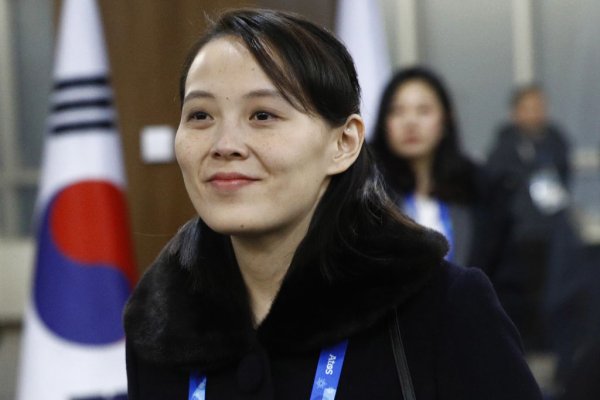 Kim Jong-un's Sister Is Making History at the Winter Olympics. Here’s What We Know About Her
Next Up: Editor's Pick