No, 'OAR' Isn't a New Country. Here's the Story Behind the OAR Winter Olympics Team

No, the world does not have a new nation state. The “OAR” Olympic athletes, seen marching in the 2018 PyeongChang Winter Olympics’ opening ceremony Friday behind a flag bearing Olympic rings and successfully taking home medals in team figure skating, curling and cross-country skiing, are, in fact, Russian athletes.

So why are they “OAR” athletes, and not just “Russian”?

Russia was barred from competing in the 2018 Winter Olympics following a doping scandal dating back to the 2014 Winter Olympics in Sochi. Russia denies the allegations. But some Russian athletes are still being allowed to compete as “Olympic Athletes from Russia,” or “OAR” for short.

These Russian “OAR” athletes face several restrictions, however. They are not allowed to march under the Russian flag or wear their country’s logo or colors. (Their sweat suits for ceremonies have been either red or gray.) When they win any medals, the Olympic theme plays during the ceremony instead of the Russian national anthem. The OAR athletes are also expected to “refrain from any public form of publicity, activity and communication associated with the national flag, anthem, emblem and symbol” at any Olympic site and are banned from sharing any images or messages on social media, according to Olympic conduct guidelines. And you’ll see that news reporters must refer to them as “Olympic athletes from Russia,” as the onscreen graphics have also been reflecting. Russian flags also do not appear next to their names.

Only 169 Russian athletes were cleared for participation on the “OAR” squad in the 2018 Winter Olympics. In comparison, Russia fielded 232 athletes at the Sochi Olympics.

But even though the OAR athletes face multiple restrictions, they are already ensuring Russia’s often dominant Winter Olympics presence is still felt on the ice and snow of PyeongChang. Halfway through the Games, they’ve racked up an impressive medal tally: the figure skating team clinched a collective silver for their event, and OAR athletes picked up bronzes in cross-country skiing, mixed-doubles curling and short track speed skating, with more skating events to come. Meanwhile the men’s ice hockey team, an early favorite in the absence of NHL players, lost in their first round to Slovakia. 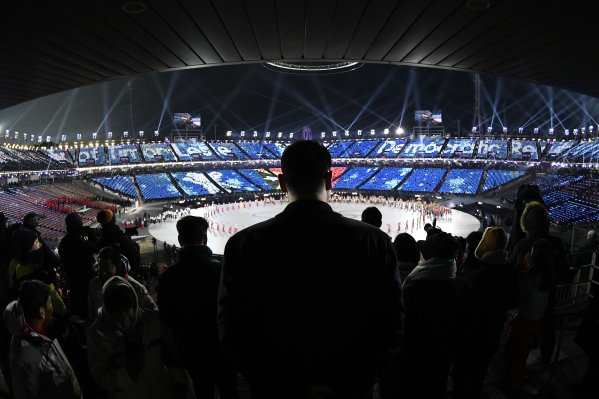 7 Things From the PyeongChang Olympics Opening Ceremony You Won't See On TV
Next Up: Editor's Pick