Norovirus Is Spreading Like Crazy at the 2018 Winter Olympics

The number of people affected by Norovirus at the PyeongChang Winter Olympics has more than doubled in just two days, reaching a total of 86, according to the Korean Centers for Disease Control and Prevention (KCDC).

So far, no athletes have been affected by the highly contagious virus, which can cause vomiting and diarrhea. Norovirus hit PyeongChang days before the 2018 Winter Olympics began, with 32 cases reported on Tuesday.

Olympic organizers quarantined around 1,200 security staff when the virus first broke out, calling in military personnel to replace them. According to The New York Times, new cases of Norovirus have spread beyond security staff, affecting members of the PyeongChang Olympics Organizing Committee, venue personnel and cafeteria workers.

“In order to stop the further outbreak of the virus, we’re quarantining patients beginning from the diagnosis to the treatment. We’re going to minimize this outbreak,” KCDC Director Kim Hyun-jun told reporters on Wednesday.

He said that Jan. and Feb are “peak season” for the virus. “In order to prevent any kind of accident that will prevent [athletes] from competing well and enjoying the Games, we’re doing our best” he said.

Norovirus, which is also called the “winter vomiting flu” and is known to break out on cruise ships, usually spreads through contact with infected people or contaminated food, water or surfaces. 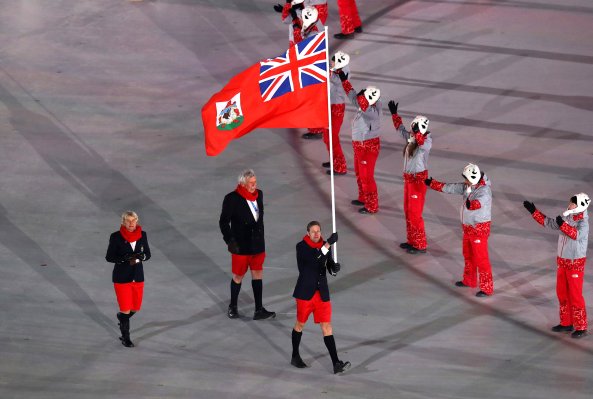 Bermuda Wore Shorts to the Freezing Winter Olympics Opening Ceremony. The Internet Is Impressed.
Next Up: Editor's Pick