Want to Know Your Fortune in the Lunar New Year? Hong Kong Has an App For That

With the Lunar New Year around the corner, many people in Hong Kong are having their fortunes told for the Year of the Dog. A common method of reading the future is through the use of kau chim, or divination sticks.

The idea is that you bear a question in mind (Will I get married this year? Will my business prosper?) as you shake a cylindrical container of 100 bamboo sticks — each about the same size and shape as a chopstick and engraved with a number. You keep shaking the container until a single stick works its way free of the bunch and falls out on to the ground. The number on that stick corresponds to a short allegory or verse that, traditionally, interpreted by a soothsayer. But this being futuristic Hong Kong, the interpreting these days is just as often done by a kau cim mobile application.

A popular place to perform kau chim is at the splendidly named Sik Sik Yuen Wong Tai Sin Temple, founded in 1921 in honor of a fourth-century Taoist hermit. I set out for it with the app loaded onto my phone.

When I arrived at the sprawling temple complex last week, passing a shrine to the Taoist gatekeeper deity Wang Ling-guan, the main altar was already full of devotees lighting incense and making requests of the temple’s patron. Some had brought offerings of food and drink. The soft cascading sound of kau cim sticks, not unlike rain, filled the square.

“This temple is a famous powerful place,” says Akito Watabe, 20, a Japanese university student visiting Hong Kong on holiday. His friend, Yuri Suzuki, 21, tells me that it was his first time praying with kau cim sticks. “I prayed for health, fortune. And for family, of course,” he says.

It wasn’t just spiritual energy buzzing through the temple’s pavilion — each of the bamboo fortune telling sticks at Wong Tai Sin is embedded with a radio transmitting chip to help the staff ensure each bucket contains the full set of 100 potential destinies.

Temple visitors can borrow sets of 100 kau cim sticks from an office in the temple's pain pavilion.
Eli Meixler—Time

Peter Mar, 68, a widower and native Hongkonger, says he performs kau cim two to three times per week: “More than some people go to the Jockey Club,” he says, referring to the Hong Kong institution that holds a gambling monopoly on the city’s popular horse races. The retired aerospace engineer was at the Wong Tai Sin temple today to pray for luck in love, since he and his new girlfriend don’t always see eye to eye.

Having explored the pavilion, including the trio of Taoist shrines to the divinities of wealth, Chinese medicine, and virtue, it was time for me to see how my own fortune shook out.

Time to face my fortune with a set of bamboo kau cim sticks.
Eli Meixler—Time

Settling my knees into well-worn indentations of a prayer cushion, I lifted my kau cim bucket and began to rock it back and forth in the direction of the main altar as my eyes began to water from the incense.

After a bit of experimental rocking to get a feel for the weight of the sticks, and a few false-starts — in which I dumped my entire bucket of divination sticks and attracted more than a few judgmental looks — I managed to work one stick forward of its companions. A few more careful wiggles, and it was knocked it clear from the cup. Success.

My stick of destiny.
Eli Meixler—Time

For worshippers who prefer a more personal touch, the temple hosts an arcade of fortune tellers, who interpret your number (and read your palm or perform numerology) for a negotiable price.

The temple hosts a wing of traditional fortune tellers, who will interpret your fortune for a small fee.
Eli Meixler—Time

But for visitors in a rush (or on a budget), the temple has installed an e-Stick fortune-telling booth beside the temple administrative office, which dispenses fortunes free-of-charge.

The kiosk asks you to key in your stick number, and prints a fortune and short thematic poem on a pink slip of paper — or makes it available for QR code scan. The service is only available in Chinese, but fortunately for non-Chinese speakers, the temple’s mobile app and web platform allow you to key in your kau cim number for an English translation.

My printed fortune in hand, I retreated from the sea of rustling sticks to the Yue Heung Shrine, a charming adjacent Buddhist pavilion built in 1933. Taking a seat in the shadow of an hexagonal, fire-engine red sanctuary, and the Yik Yik lotus fountain, I took a deep breath, cast my best intentions to the stars, and fired up the app.

The outlook wasn’t favorable — in fact, it was “poor,” the lowest of the app’s five ranked grades. I braced myself and scrolled, hoping the future that unfurled itself on my touch screen wasn’t as dire as I feared.

It was. “The sick will be in critical condition. The pregnant will encounter alarm. Travelers will be deterred on their way.” Well that certainly doesn’t sound good. The app cautioned me that my family will not “achieve peace,” business will be “unprofitable,” and neither wealth nor fame will charm my future. “Search for lost items will be in vain…Ill luck is inevitable.” So much for a sweet New Year.

For fortune-seekers abroad or pressed for time, the temple also has a Taoist web portal that allows users to file prayers and submit fortunes remotely. As for this writer, I know where I’ll be when the Year of the Dog rolls around: at home, my passport and checkbook in a lockbox and my tail between my legs. 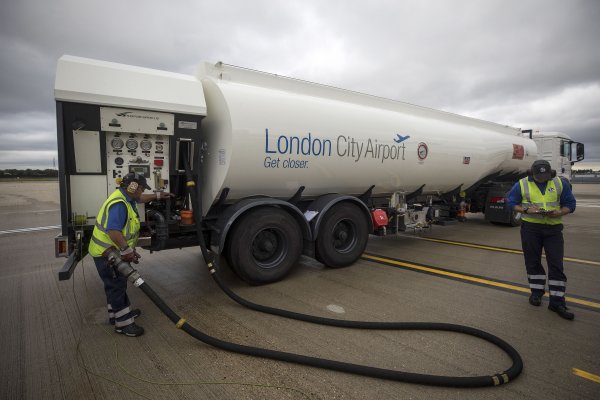 This London Airport Is Shut Down After Workers Found a World War II Bomb Nearby
Next Up: Editor's Pick