U.S. Men's Skating Favorite Nathan Chen Is Off to a Rough Start at the Olympics

The first skating event of the PyeongChang Olympics began Friday — even before Opening Ceremonies — and the early morning timing may be throwing athletes off their game.

While skating competitions generally occur at night, at this year’s Games they’re scheduled for 10 o’clock in the morning Korea time to accommodate the time zone difference with much of the U.S. That shift may take some getting used to, as the first competitors to take the ice in the men’s portion of the team competition struggled to land their jumps. The only top contender in the category to skate cleanly was Japan’s Shoma Uno, who led the men.

The men’s competition was followed by pairs, won by Evgenia Tarasova and Vladimir Morozov, Olympic Athletes from Russia (OAR), followed by Canada’s Meagan Duhamel and Eric Radford. Germany’s Aljona Savchenko and Bruno Massot finished third. The competition provided a first glimpse of the OAR athletes, who have been cleared to compete following the International Olympic Committee’s ban on Russia’s participation in the PyeongChang Games because of doping violations during the 2014 Sochi Olympics. OAR skaters could not wave the Russian flag or wear uniforms displaying “Russia” or the country’s flag.

Read more: How to Tell the Difference Between the 6 Figure Skating Jumps You’ll See at the Olympics

It’s only the second time team skating has been an Olympic event, in which countries are awarded points based on their rankings — 10 points for first place, nine for second, etc. Once the men’s scores and pairs’ scores were added, Canada led the team event followed by the U.S. and Japan. Those three countries, along with the fourth and fifth place finishers OAR and Israel, will move on to the medal round on Feb. 11 and 12.

The U.S.’s Nathan Chen, a gold medal favorite in the individual men’s event that starts on Feb 16, finished fourth after an uncharacteristically error-filled program in which he fell on the triple axel, doubled a planned quadruple jump and downgraded a combination jump. Israel’s Alexei Bychenko finished second and Canada’s Patrick Chan finished third.

Chen said the early morning competition time likely played a role in how he performed, although he has been rehearsing with earlier training times back home in California. “The seven o’clock practice was a little rough,” he said. “With the time change, it’s not a big deal, I just need to recalculate everything in my head.”

He admitted to nerves as well, but said “having this experience allows me to do better next time. I’m glad I got the opportunity to at least come out here, get the program down and learn from it. All I can do is try to analyze it and then just let it go and move on.”

Alexa and Chris Knierim of the U.S. also finished fourth among the pairs, giving the U.S. enough points to stand in second place behind Canada.

Read more: See the Top Olympic Skaters Compete on the Ice as Adorable Kids Before They Were Famous

While skating federation officials have been moving toward team events to encourage more camaraderie among the characteristically internally focused skaters, the skaters themselves have been of two minds about having to compete in an additional event over a short period of time. For some, it’s an opportunity to shake out the Olympic jitters and get used to competing under the Olympic rings. For others, it’s an added physical and mental challenge to perform at their peak twice in a matter of days.

One benefit of the team event format, however, is the personal cheering squad at rink-side. U.S. skaters Bradie Tennell, Mirai Nagasu, Maia and Alex Shibutani, Adam Rippon and Vincent Zhou filled the USA box to support their teammates; the ladies and ice dance team short program will be on Feb. 11. 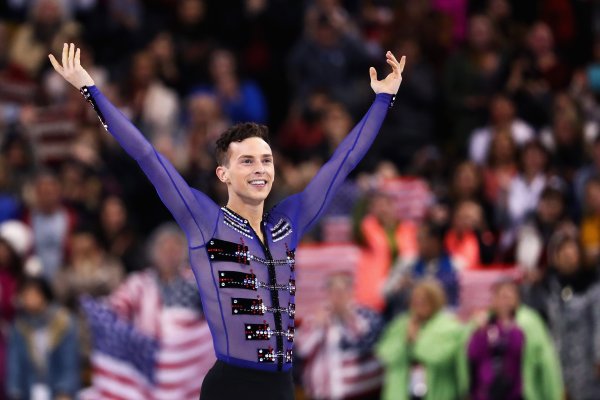 Figure Skater Adam Rippon Already Made Olympics History. Here Are 5 Things to Know About Him
Next Up: Editor's Pick