Reuters has published a detailed investigation into the massacre of 10 Rohingya men by Myanmar soldiers and villagers, that it says led to the detention of two of its reporters.

Wa Lone and Kyaw Soe Oo were charged with illegal possession of state secrets while reporting on the ongoing Rohingya crisis in Rakhine state. They are currently awaiting trial behind bars.

According to Reuters’ special report, published Thursday, Myanmar soldiers detained and executed 10 Rohingya men and teenage boys with the help of local Buddhist villagers in Rakhine state’s Inn Din village on Sept. 2. Since August, more than 688,000 members of the Muslim Rohingya minority have been displaced from northern Rakhine into Bangladesh, fleeing a campaign of violence by Myanmar’s military that top U.N. officials have called “ethnic cleansing” with “elements of genocide.”

“The Reuters investigation of the Inn Din massacre was what prompted Myanmar police authorities to arrest two of the news agency’s reporters,” the news agency said in the report.

Reuters’ account draws on interviews from the victims’ families as well as testimony from villagers and security personnel, confirming the military’s role in the incident. In a rare admission last month, Myanmar’s army admitted that its soldiers were responsible for the 10 Rohingya deaths, but it has since denied a report by the Associated Press revealing more mass graves.

The military had said the slain men belonged to a group of Rohingya “terrorists,” but Reuters reported that the men were “fishermen, shopkeepers … two teenage students and an Islamic teacher,” who had been picked out of a group of hundreds of Rohingya villagers, according to witnesses.

“We believe this is a story of vast global importance, and we have a responsibility to publish. After all, that’s what we do as journalists, we report stories … fairly and honestly,” Reuters President Stephen J. Adler told BBC Newsnight while explaining the decision to publish the story while the trial is still underway, noting that Wa Lone and Kyaw Soe Oo were credited for their reporting. “They fully support our publishing the story,” Adler said. 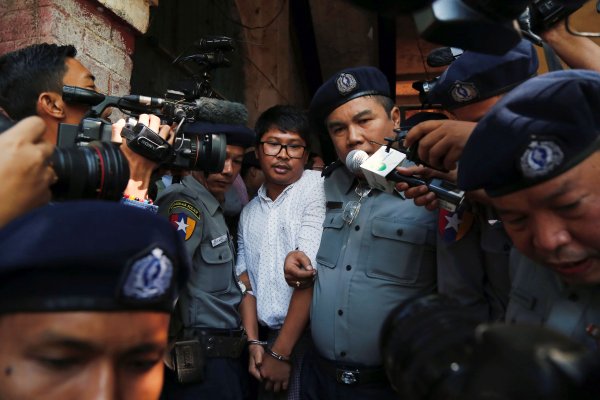 Myanmar Cracks Down on Press Over Rohingya Coverage
Next Up: Editor's Pick