Hong Kong’s High Court has rejected the appeal of former British banker Rurik Jutting, who was convicted for the 2014 murders of two women in Hong Kong. He will not be given a new trial.

“There is no merit whatsoever in this ground of appeal,” wrote Justices Michael Lunn, Andrew Macrae and Kevin Zervos, according to court documents Friday.

In a case that made global headlines, a jury unanimously found the 32 year-old guilty of torturing and killing Indonesian migrant workers Sumarti Ningsih, 23, and Seneng Mujiasih, 28, in November 2016. Jutting, a Cambridge-educated employee of Bank of America Merrill Lynch, pleaded not guilty to murder, but guilty to manslaughter, citing “diminished responsibility” due to substance abuse, and narcissistic and sadistic disorders.

The court rejected Jutting’s defense and sentenced him to life in prison, which Jutting has been serving in a maximum security prison on the southern side of Hong Kong Island.

In December, Jutting applied for leave to appeal his conviction. His lawyers argued that during the trial, the judge had mislead the jury when explaining to them how to understand Jutting’s state of mind in relation to the murders.

“The error made by the learned judge orally and in writing made repeatedly to the jury was to direct the jury that an abnormality of the mind for the purposes of the homicide ordinance meant a disorder,” Jutting’s barrister, Gerard McCoy SC told Justices.

Almost two months after the hearings, the Justices rejected Jutting’s appeal. “We are satisfied that having regard to the evidence at trial the judge was entitled to invite the jury to consider approaching their verdicts in that manner,” they wrote in a statement Friday. “Most importantly, the message given to the jury was perfectly clear, namely that it was a matter for them whether they took that view or not.”

Jutting’s double-murder trial shocked the world as the horrific details of the killings emerged, the most incriminating of which came from iPhone footage shot by Jutting himself. In November 2014, Jutting was arrested after calling the police to his high-rise luxury apartment where the two mutilated bodies of the women were found.

At the end of the trial, Judge Michael Stuart-Moore said, “This must rank as one of the more horrifying murder cases ever to come to court in Hong Kong.” 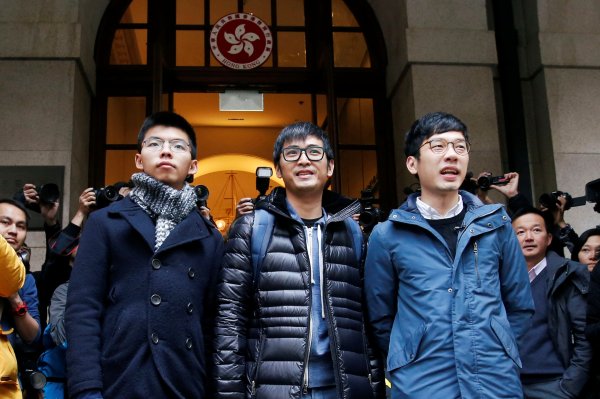 Hong Kong May Have Just Made It Easier to Jail Dissidents
Next Up: Editor's Pick