Investigators are trying to triangulate signals picked up in the southern Indian Ocean that could come from the black box of missing Malaysia Airlines Flight 370, but the race is on as the device’s transponder battery only has a matter of hours left to run.

“This is a most promising lead,” former Australian defense-force chief Angus Houston, in charge of coordinating efforts, told reporters in Perth, Australia, on Monday. “It’s probably the best information that we have had.”

Signals consistent with an aircraft’s flight and voice recorder were picked up Saturday night and Sunday morning by the Australian vessel Ocean Shield, which was towing a U.S.-made pinger locator. The first signal was received for two hours and 20 minutes, and the second for 13 minutes, some 1,040 miles (1,680 km) northwest of Perth.

Despite confirming that the signal “sounds to me just like an emergency-locator beacon,” Houston refused to be drawn on whether it was coming from MH 370’s black box.

Further detection “would be the trigger to launch the underwater autonomous vehicle with the more accurate sonar and potentially a camera for mapping and looking at the ocean floor,” said Peter Levy, commodore of the Royal Australian Navy.

However, the Bluefin 21, the unmanned submarine on hand to scour the seabed to verify the signals, would be working at the very limit of its capacity at that depth.

In addition, time is of the essence. The black-box transponder only has around 30 days of battery life, and Monday marked day 31 since the Boeing 777 disappeared an hour into a flight from Kuala Lumpur to Beijing. Analysis of maintenance data transmissions indicates the plane crashed off the western coast of Australia with all 239 passengers and crew presumed killed.

“We’re not talking about days now, we’re really talking about hours left of the battery life,” Michael Daniel, an international aviation-safety consultant who spent over three decades at the U.S. Federal Aviation Administration, tells TIME. “So we have to be cautious-optimistic.”

Unfortunately, the process of triangulation is laborious. The ocean is about 2.8 miles (4.5 km) deep — the equivalent of a dozen Empire State Buildings — and the pinger locator can only detect a strip about 4 miles (6 km) wide, meaning several passes may be required.

For the two vessels currently equipped with pinger locators to complete one 7-mile (11 km) route and then turn around again takes up to eight hours, owing to the huge length of cable needed to get the submerged device close to the ocean floor.

On Sunday, a senior Malaysian official told CNN that the twin-engine jetliner likely skirted Indonesian airspace to avoid detection. This ties in with previous assertions that the plane was taken off course “through deliberate action.” What caused the 200-ton jet to deviate from its flight path remains a mystery, although Malaysian police have ruled the 227 passengers out of any involvement.

The British navy ship H.M.S. Echo is checking out a separate signal detected by the Chinese vessel Hai Xun on Friday and Saturday, which also may be consistent with the black box’s beacon, but more than 500 km (345 miles) from the Ocean Shield’s latest detections. 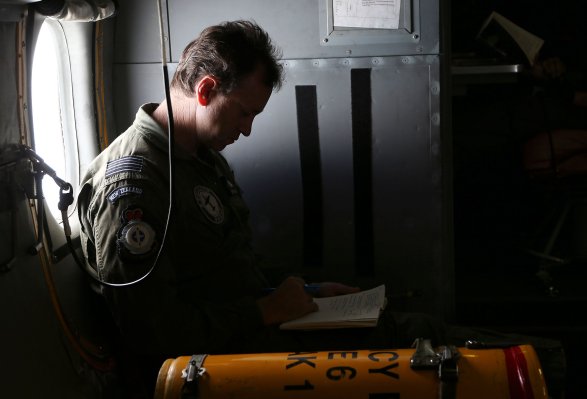 MH370 Search Crews Look for a Signal
Next Up: Editor's Pick