Senior White House aides had heard of domestic violence allegations against President Donald Trump’s staff secretary before reports published on Tuesday and Wednesday that led to his resignation, four people familiar with the matter said.

It was not clear who among Trump’s top aides knew of Staff Secretary Rob Porter’s history with his two ex-wives, or how much they knew. Trump himself was unaware of the allegations before the DailyMail.com approached the White House on Tuesday with details of an interview with one of the former wives, two officials said.

Porter announced on Wednesday he would resign, after The Intercept published an interview with a second ex-wife and a photo of what she said was a black eye inflicted by Porter. He denied both of the ex-wives’ allegations.

His last day at the White House is today, a person familiar with the matter said.

Trump didn’t mention Porter when he gathered with members of Congress, members of the military and former Vice President Dick Cheney at the White House on Tuesday evening to watch the movie “12 Strong.” Porter’s situation wasn’t discussed in the White House’s senior staff meeting on Wednesday led by chief of staff John Kelly, but it was addressed in smaller groups, aides said.

After issuing a complimentary statement on Porter earlier on Wednesday, Kelly said in the evening that he “was shocked by the new allegations released today. There is no place for domestic violence in our society.”

Porter’s title understates his significance in the White House. He served as a clearinghouse for paperwork coming in or out of the Oval Office, and he was an important influence on policy in his own right. Few aides enjoyed greater access to the Oval Office, or spent more time in the president’s company. He also played a vital role in helping Kelly try to bring order to the White House.

Allegations of domestic violence can be grounds for the government to deny security clearances to aspiring officials. Yet Porter had sat in on meetings of the National Security Council where top secret matters were discussed, according to three people familiar with the situation. Someone in his position would have had an interim clearance while the FBI conducted a background check, according to one official.

Senior staff at the White House apply for five-year clearances, and the process can be lengthy — some current officials are still waiting, aides said.

Stores in NYC Looted After Protests Despite Curfew

It is not clear whether Porter ever received a permanent security clearance. The White House Press Secretary, Sarah Huckabee Sanders, would not say what sort of clearance he has.

“The fact that Porter might have held a senior White House position without a security clearance is troubling and merits a full investigation,” said Chris Lu, former cabinet secretary under President Barack Obama and senior fellow at the University of Virginia Miller Center. “I’ve lost count as to how many Trump appointees have​ been sidelined because of their past views or conduct​. But​ this is further evidence of a non-existent vetting process.”

Porter’s exit is another embarrassing staffing setback for Trump and further turbulence for his National Security Council, the president’s chief advisers on matters of war and diplomacy. Given the allegations made by his former wives, who The Intercept said were both interviewed by the FBI as part of Porter’s background check, some White House aides were disturbed that he had access to top secret information

All of the officials interviewed for this story requested anonymity to discuss a personnel and national security matter.

A president’s staff secretary typically would be cleared at a level of security called Top Secret Sensitive Compartmented Information, allowing the aide to handle extremely sensitive information, according to a former White House official with knowledge of the process. The secretary would have access to two computer systems, one classified and the other unclassified, the former official said.

Staff secretaries are also typically privy to information in the President’s Daily Briefing, a summary of intelligence on threats to the U.S., the former official said.

Porter’s second wife, Jennifer Willoughby, told the DailyMail.com — the U.S. website of a U.K. tabloid — that he had difficulty controlling his anger and at one point pulled her out of the shower and yelled at her. She took out the protective order against him in after he allegedly violated a separation agreement and punched through glass in the door of their home, cutting himself. The website published a copy of the order.

Porter’s first wife, Colbie Holderness, provided a brief statement to DailyMail.com alleging Porter had abused her, but the website didn’t detail her claims. The Intercept published its interview with Holderness on Wednesday.

Some White House aides were particularly disturbed by the photo The Intercept published of Holderness with a black eye. She told the publication Porter punched her while they were on vacation.

Porter called the allegations “outrageous” and “simply false.” In a statement, he said he had taken the pictures that Holderness provided to The Intercept and that “the reality behind them is nowhere close to what is being described.”

“I have always put duty to country first and treated others with respect,” Porter said in a statement. “I am deeply grateful for the opportunity to have served in the Trump administration and will seek to ensure a smooth transition when I leave the White House.”

Holderness did not respond to attempts to contact her by telephone and email.

Kelly’s first statement on Porter complimented him without mentioning the allegations.

“Rob Porter is a man of true integrity and honor and I can’t say enough good things about him,” Kelly said. “He is a friend, a confidante and a trusted professional. I am proud to serve alongside him.”

Several White House aides said Wednesday that Kelly’s statement was a mistake. But Kelly has leaned heavily on Porter since becoming chief of staff in July, and considers the staff secretary to be a close and trusted confidant, they said.

The Daily Mail has recently delved into Porter’s personal life, reporting last week — complete with paparazzi-style photos — that he was in a romantic relationship with another of Trump’s most senior aides, White House Communications Director Hope Hicks.

Kelly assigned Porter to help bring more discipline to the West Wing by ensuring that no staff memos, policy documents, correspondence or news articles reached Trump’s desk without careful inspection. He almost always accompanied the president when he traveled, and frequently could be seen near Trump as he boarded Marine One and Air Force One.

He was one of a handful of aides who helped to write the president’s first State of the Union address. As an assistant to the president, Porter was paid the top White House staff salary of $179,000. 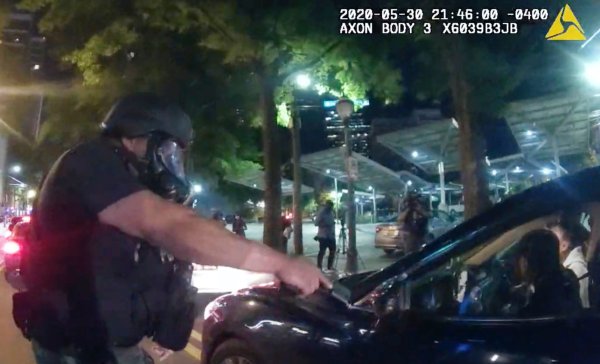