The bad news is that Merkel is not likely to have much fun in her fourth go-round as chancellor. These five facts explain why.

This political breakthrough doesn’t come cheap for Merkel and her CDU party, especially when you consider that its 33 percent share in September elections dwarfed the SPD’s second-place haul of 20.5 percent.

In exchange for joining the coalition, the SPD will be given the critical finance ministry in addition to the labor and foreign affairs ministries. It also looks like the SPD has successfully limited German arms exports, in addition to arranging for international development spending to increase on a one-to-one basis with any increase in defense spending. And while the SDP didn’t get its higher income tax band for wealthy households, it did get generous subsidies for social care and increased federal subsidies to hospitals. Furthermore, a number of Germany’s 2020 emissions targets that had been dropped in previous rounds of negotiations have returned, alongside sector-by-sector specific 2030 targets.

All these concessions make keeping CDU/CSU hardliners in check difficult—especially those members incredulous that Merkel surrendered the finance ministry without at least taking back the labor or foreign affairs portfolios.

Despite its sizable haul in coalition talks, the SPD is not entirely sold on joining yet another coalition with Merkel, the third such “grand coalition” since 2005. Plenty of rank-and-file SPD members believe that it’s their continued association with Merkel that resulted in their party’s worst electoral performance since World War II. It’s the reason why the SPD originally balked at the prospect of another coalition, and why Merkel initially attempted to strike a coalition agreement with the business-friendly Free Democrats (FDP, 10.7 percent of the vote) and Greens (8.9 percent of the vote). But when those talks fell apart, the SPD suddenly found itself as kingmaker—concessions that were once unthinkable were suddenly on the table. It also helps that the SPD isn’t wild about the prospect of snap elections after such a lackluster outing in September. Recent polls show that the SPD would perform even worse if elections were run again.

But Germany isn’t in the clear yet. The SPD’s 450,000+ members still need to vote on whether to accept the terms of the coalition. Certain blocs within the party, particular the Young Socialists wing, vehemently oppose joining a Merkel coalition—both on principle and as a matter of political strategy. Still, it’s more likely than not the SPD agrees to join. Of course, a politically-weakened Merkel also gives SPD members more room to cause problems down the line, especially if (read: when) they don’t agree with a particular Merkel policy.

Another reason Merkel initially opted to pursue a “Jamaica coalition” with the FDP and Greens (so named because the colors of the three parties are the same as the Jamaican flag) was to ensure that the SPD would be the official leader of the opposition rather than the far-right, anti-immigrant, and virulently xenophobic Alternative fur Deutschland (AfD). No far-right party had entered the Bundestag in the post-war period till this past election; now the AfD (which came in third with 12.6 percent of the vote) is poised to be the “chief” opposition party in German parliament, a position that allows it to be the first to respond to the government in parliamentary debates and affords it additional airtime and prominence.

It’s a formalization of power that’s particularly worrying given that it normalizes a party that, up until a few years ago, was relegated to the extreme fringes of German politics. Already, the number of people who say they would vote for the AfD if the election was held again has ticked up by more than a percentage point. And you can be sure the AfD will be using its newfound visibility to make life as difficult as possible for Merkel.

FDP and Greens Will Agitate

Now that both the FDP and Greens are on the outside looking in, they have very every political incentive to make Merkel’s life difficult as well. Those initial “Jamaica” talks fell apart over continued disagreement on refugees, global warming, European integration, pensions, labor and taxes. There was room for compromise on most of these issues, but absent the prospect of plum government postings, both groups are now better off retreating into their respective voter bases.

The free-market FDP will hammer away at the CDU-SDP government for not doing enough to protect German competitiveness in the face of digital disruption and industrial scandals. The Greens, meanwhile, will inevitably criticize the coalition of still not doing enough to combat the existential threat of climate change and not furthering European integration. Merkel may still be trying to navigate her fourth term as successfully as possible, but parties are already playing politics to position themselves for whatever comes next.

The Rest of the World

As if all the domestic political discord wasn’t enough for Merkel, the outside world is on fire, too. Eastern European EU members continue to flaunt EU directives and customs, the Syrian refugee crisis has been staunched somewhat but is by no means over, Syria itself continues to be a morass (and now features two NATO members, the U.S. and Turkey, engaged in a proxy war over the Kurds), and Merkel no longer has a committed ally in Washington to at least nominally stand up for the West.

For Merkel, at least, the fourth time will most definitely not be the charm. 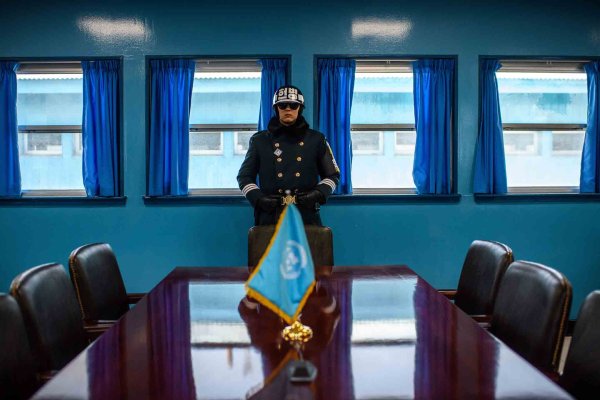 As the Koreans Share an Olympic Moment, Trump Risks Irrelevance
Next Up: Editor's Pick