For the Trump White House, a man’s denial carries a lot of weight.

During the 2016 presidential campaign and into the White House, Trump and his aides have defended a male aide accused of domestic violence, a male Senate candidate accused of pursuing inappropriate relationships with teens and a male campaign manager accused of assaulting a reporter.

In each case, Trump and his top staffers used strikingly similar language to defend the accused, noting that he had denied it, defending his integrity and casting doubt on the women’s claims.

That’s been the case even when there were multiple women coming forward with similar allegations, well-reported stories from multiple news outlets, photo and video evidence and concerns from FBI agents doing routine background checks.

Here’s a look at the three cases.

Senior aides to Trump knew for months about allegations of domestic violence against top White House staffer Rob Porter levied by his ex-wives, who had relayed the allegations to the FBI during a routine background check, according to CNN. Porter still did not hold a security clearance.

Yet in response to a story in the Daily Mail featuring an interview with one of Porter’s ex-wives and a copy of a protective order she obtained in 2010, Kelly, Trump’s chief of staff, defended Porter as an honorable man.

“Rob Porter is a man of true integrity and honor, and I can’t say enough good things about him. He is a friend, a confidante and a trusted professional,” Kelly told the Mail. “I am proud to serve alongside him.”

The Mail then published a second story in which Porter’s first wife, Colbie Holderness, alleged similar abuse, while The Intercept published photos of Holderness with a black eye, prompting Porter to resign and Kelly to say he was “shocked by the new allegations.”

“I stand by my previous comments of the Rob Porter that I have come to know since becoming Chief of Staff, and believe every individual deserves the right to defend their reputation,” he said.

Even after Porter resigned, Sanders read a statement from him at the daily White House press briefing reiterating his innocence and calling the allegations “simply false” and a “smear campaign.”

On Friday, Trump briefly addressed the Porter scandal in comments with reporters.

“We wish him well,” Trump said. “As you probably know, he says he is innocent and I think you have to remember that.”

In November of 2017, Trump personally defended Alabama Senate candidate Roy Moore after the Washington Post published a story in which Leigh Corfman alleged that Moore initiated a sexual encounter when she was 14 and he was 32.

The official White House line was that if the allegations were true, Moore should step aside, but Sanders also cast some doubt on the story by calling it a “mere allegation” while talking with reporters aboard Air Force One.

“Like most Americans the president believes we cannot allow a mere allegation, in this case one from many years ago, to destroy a person’s life,” she said.

By the end of the campaign, at least eight women went public with accusations of misconduct against Moore.

Trump himself went even further, even after several more women came forward with similar stories.

“Well, he denies it. Look, he denies it. If you look at what is really going on and you look at all the things that have happened over the last 48 hours, he totally denies it,” Trump told reporters at the White House. “He says it didn’t happen. And, you know, you have to listen to him, also. He said 40 years ago, this did not happen.”

Trump maintained his endorsement of Moore, who lost the Senate race.

In March of 2016, Trump personally defended then-campaign manager Corey Lewandowski after he was charged with misdemeanor battery for an altercation with female journalist Michelle Fields at a campaign event.

Speaking to reporters, Trump said that he would not fire Lewandowski because he doesn’t “discard people.”

“I think it’s a very, very sad day in this country when a man could be destroyed over something like that,” Trump said.

He then made similar remarks at the campaign rally, noted that Lewandowski had a “beautiful wife and children,” criticized Fields, argued that he should file charges against Fields for grazing his arm at the event and questioned bruises she said she had received when Lewandowski grabbed her arm.

“How do you know those bruises weren’t there before? I’m not a lawyer,” Trump said. He repeated his doubts later: “Wouldn’t you think she would have yelled out a scream if she had bruises on her arm?”

Florida police later dropped the charges against Lewandowski, saying there was not enough evidence to convict him. Lewandowski was later fired as campaign manager for unrelated reasons.

In many ways, the defense of these three men mirrors Trump’s own defense against allegations from at least 18 women who have accused the president of sexual misconduct. Faced with the accusations on the campaign trail, Trump called the women “horrible, horrible liars.”

“At least 16 women accused the president of sexually harassing them throughout the course of the campaign,” asked a reporter from CBS News. “Last week, during a press conference in the Rose Garden, the president called these accusations ‘fake news.’ Is the official White House position that all of these women are lying?”

“Yeah, we’ve been clear on that from the beginning, and the president’s spoken on it,” Sanders replied.

Tessa Berenson contributed to this report. 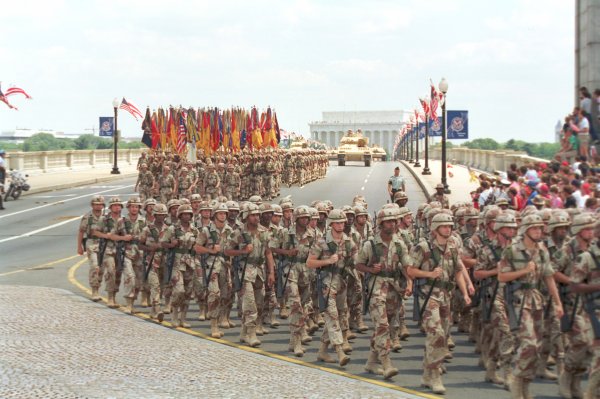