Olympic Speedskater Shani Davis Is Furious Over How the U.S. Decided Who Would Carry the Flag

Choosing which world-class athlete would carry the American flag at the Opening Ceremony for the 2018 Winter Olympics did not come without controversy.

He also included a hashtag noting that it was Black History Month.

The coin toss, according to the Associated Press, came after a 4-4 tie between Davis and Hamlin. Olympic athletes from the eight different sports federations — biathlon, bobsled and skeleton, curling, hockey, figure skating, ski and snowboarding, luge and speedskating — voted for their choice, resulting in the tie.

Representatives from the U.S. Olympic Committee, the U.S. Speedskating Team and the U.S. Luge team did not immediately respond to requests for comment from TIME.

Read more: 31 Athletes to Watch at the PyeongChang Winter Olympics

Davis and Hamlin are both renowned athletes in their sport and have both made history at the Winter Olympics before. Davis is not only the first black athlete to ever win a gold medal in an individual event at the Winter Olympics, but also the first man to win back-to-back gold medals in the 1000 meters. He also has won the silver medal for the 1500-meter race twice. His two back-to-back wins came in 2006 and 2010. One of the most decorated athletes in his sport, Davis he will be competing in his fifth Winter Olympics this year.

A four-time Olympian, Hamlin became the first American athlete to win a medal in the luge event in Winter Olympics history when she earned a bronze at the 2014 Games in Sochi. A two-time world champion, Hamlin also has 23 world cup medals.

“Working hard and earning success is one thing, being acknowledged as a great representative and member of Team USA by fellow athletes – many who I have been inspired by – is above and beyond anything I’ve experienced,” Hamlin said in the announcement of her role as flag bearer. “It is definitely a privilege and honor to be the one to lead the team and will be a very special moment.” 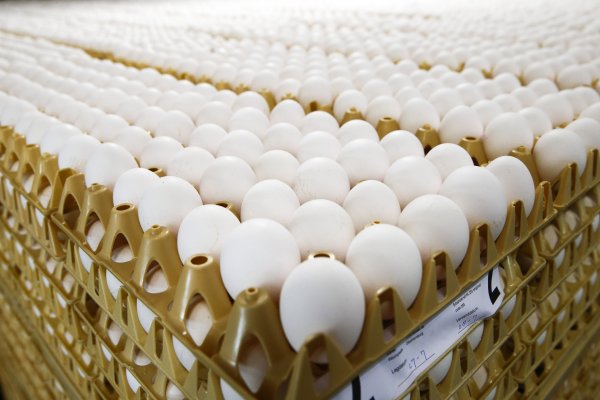 An Olympic Team Mistakenly Ordered Thousands of Eggs
Next Up: Editor's Pick