Fifty Shades Freed Is a Pleasure. Just Don’t Call It a Guilty One

Women’s desire is a mysterious, feral thing, and if you think you’ve got it figured out because you’ve looked at a few Georgia O’Keeffe paintings, you’re not even close. No wonder most men, and plenty of women, would rather not scrutinize either the success or the content of E.L. James‘ expansively steamy Fifty Shades novels and the movies adapted from them, Fifty Shades of Grey (2015), Fifty Shades Darker (2017) and, now, Fifty Shades Freed (running time 2 hours). It’s easier to laugh at these deliriously popular Fifty Shades books and movies than to tangle with what’s actually in them and with what they might mean to an audience. Plus, in the midst of our roaring cultural conversation about sexual harassment and abuse in the workplace, the elusive intricacy of what makes women tick is probably the last subject any of us wants to talk about. Which is exactly why now is the time to talk about it.

In Fifty Shades Freed, released in the U.S. on Feb. 9, Dakota Johnson returns as Anastasia Steele, the once prim but now sexually adventurous heroine introduced in Fifty Shades of Grey. In that movie, she was a recent college grad drawn into a somewhat unorthodox sexual relationship with 27-year-old Seattle billionaire Christian Grey (Jamie Dornan). Her initiation into Grey’s brand of BDSM kink happens in his “playroom,” a red-velvet-festooned bachelor lair kitted out with an array of restraints and dainty, rather harmless-looking riding crops. Although it doesn’t happen overnight, Anastasia progresses from timid but mildly curious mouseburger to self-assured, table-turning tigress. Meanwhile, the dizzying head game played out between these tentative lovers is familiar to just about any straight woman or gay man who has dated in the past, say, 2,000 years: Grey, though drawn to Anastasia, is emotionally generous one minute and stonily withholding the next. Her love can tame him, heal him! She’s special that way.

That dynamic plays out over and over–and over–in the Fifty Shades trilogy. But the pattern is part of the fun: as Prince said, there’s joy in repetition. Anastasia breaks with Grey at the end of the first film, when his sadistic impulses unreel a bit too far for her taste, and the two reconcile in Fifty Shades Darker. By this point, their relationship has become a more manageable pie chart of plain-vanilla and debauched sex, and they’ve gotten much better at talking. Most significant, Anastasia has learned to communicate exactly what she wants: I like it like this, not like that. Back off. Come closer.

Fifty Shades Freed opens with a comically exaggerated Modern Bride fantasy of a luxurious but intimate wedding followed by a no-expenses-spared honeymoon. (In one of the Fifty Shades Freed‘s swooniest howlers, the newlyweds canoodle as the Eiffel Tower looms approvingly in the background.) Anastasia has married into money, but she’s also set on building her career as a book editor. And Grey’s need for control is weakness, not strength, and Anastasia knows it. Tellingly, her going-away outfit, a sleek eggshell pantsuit, is more impressive than her ho-hum-pretty wedding dress. A wedding dress is a goal, an end in itself, but a pantsuit is the future: it’s what a woman wears when she’s going places.

In Fifty Shades Freed there is also, of course, sex that is alternately steamy and ridiculous, and sometimes both at once. Fifty Shades Freed is ridiculous–luxuriously so. That doesn’t make it bad, no matter what professional critics–most of whom savaged the two earlier films–are likely to tell you. Fifty Shades Freed is what many people would call, in an attempt to prove that they know a good movie when they see one, a “guilty pleasure,” though I rail against that idea in principle. Nothing that brings pleasure ought to be reflexively entwined with guilt. Besides, movies that critics–or even our friends–loftily decree “bad” are actually often “good” in ways that have little to do with aesthetics or even taste. Maybe there’s clunky dialogue or thin characters or sex that would be silly if you tried to re-enact it in real life. But occasionally a movie just has the juice, some indefinable energy that even a perfectly crafted film can lack.

There’s another dynamic at work here. When movies are targeted toward women, as the Fifty Shades ones are, the chance that they will be dismissed increases exponentially, especially when so many critics happen to be men. That’s nothing new, and professional critics aren’t the only ones who scoff. Plenty of regular guys know a “chick flick” when they see one, though it goes without saying that some men love them, secretly or otherwise.

And women aren’t obligated to like them or respond to them, though it may be easier for us to read between the lines of their popularity. There’s a long, proud tradition of Hollywood films known, not always respectfully, as “women’s pictures,” movies with female protagonists who suffer hardships, make sacrifices and sometimes find unexpected joy and freedom. The women’s-picture umbrella is wide, covering 1940s triumph-over-adversity melodramas like Mildred Pierce; vivid, tear-soaked 1950s spectacles like Written on the Wind; and 1980s terminal-illness weepers like Terms of Endearment. Serious film scholars recognize, rightly, the artistry of some of these pictures. But the woman’s film, broadly speaking, has always been a potential target of derision. “What more damning comment on the relations between men and women in America than the very notion of something called the ‘woman’s film’?” the film critic and historian Molly Haskell wrote in her classic 1974 study From Reverence to Rape: The Treatment of Women in the Movies. “And what more telling sign of critical and sexual priorities than the low caste it has among the highbrows? Held at arm’s length it is, indeed, the untouchable of film genres.”

The Fifty Shades movies, replete with their fantasies of self-actualization and sexual experimentation and discovery, at least partially fit the profile of traditional women’s pictures. But they’re also a revival of another genre that has all but disappeared from Hollywood: the erotic thriller. The 1980s and ’90s were a golden age of movie nudity: think of the feverish carnality of Kathleen Turner in Body Heat, or Sharon Stone’s sultry brashness in Basic Instinct. Male nudity is more common in mainstream movies today than it was then. But female nudity has become practically extinct in Hollywood films: we still see it, but for the most part only in independent and foreign films. In the ’80s and ’90s you could argue, and many did, that movie nudity was generally gratuitous and degrading to women. But the little female nudity we see in mainstream films today is worse: it’s reserved largely for broad, jokey comedies like the 2016 blockbuster Deadpool, in which Morena Baccarin nearly stops the show in a sex-scene montage spanning nearly every holiday of the calendar.

That scene is too good-natured to offend any sensible person, but you’d hardly call it erotic. Even more depressingly, it’s symbolic of an increasingly puerile approach to movie sex. Today’s sex scenes, and the semi-nudity they feature, are rarely languorous or sensual. Instead, sex is generally presented as something best rushed through, Energizer Bunny–style, to limit the risk of embarrassment or remorse, or even the possibility of actual pleasure. In real life and in the best movies, a woman’s naked body has an innate elegance; it looks less dignified when it’s obscured by lingerie or a low-cut top, as we so often see in movies today. Those little bits of cloth speak less of modesty than of a perfunctory impulse to cover up, as if a woman’s nakedness could be nothing but an invitation to shame.

Movie nudity is so rare today that it makes what Dakota Johnson does, in all three Fifty Shades movies, that much more remarkable. She takes Anastasia seriously while retaining a sense of humor about herself. In a scene where Grey’s tongue follows the length of Anastasia’s leg, from ankle to wherever, Anastasia gives in to the moment, her neck arched in glorious silhouette. Johnson has a sense of Anastasia not just as part of a pristinely arranged tableau but also as a sensualist, with all the attendant nerve endings and complex emotions that that implies. Johnson is fearless about stripping bare, but her bold flirtiness is inextricable from her dignity: the sauciness of her mother Melanie Griffith and the marble-cool poise of her grandmother, Hitchcock blonde Tippi Hedren, merge in her.

The stolidly handsome Dornan, on the other hand, is something of a dud. But even that works in the movies’ favor: all eyes are on Anastasia’s pleasure. Fifty Shades Freed‘s director, James Foley, and cinematographer, John Schwartzman, keep the movie’s sex scenes elegant and sleek, but not airless. This is a case where a woman’s nudity is presented for women’s delectation, not men’s. In her most euphoric moments, Anastasia looks how, if we’re lucky, some of us at times feel.

In that sense, Anastasia shares her youth and beauty even with those who are no longer young or youthfully beautiful. The current sexual-harassment firestorm has brought with it a clash between younger women and older feminists. Younger women perceive the message of older women as “You should have to put up with the same agonies we did.” Older women just want the younger ones to recognize that sexual impulses aren’t fully tamable beasts: civilization depends on our control of them, but they will always present dangers that demand our caution and awareness.

The signals between young and old have been crossed. We can only hope good faith will win out. But maybe Anastasia stands for everything second-wave feminists want for their young counterparts, at least in bed. Those women availed themselves of the sexual freedom afforded by the pill but they still had to deal with crappy, chauvinistic guys, not to mention episodes of uncomfortable, often regrettable sex in muddy fields and VW buses. Anastasia, meanwhile, knows when to say no, and when to walk away. She has set the terms of her own sexual bliss, as victor not victim. And, gorgeously, she can laugh about it all. Why shouldn’t it be our pleasure to laugh along with her? 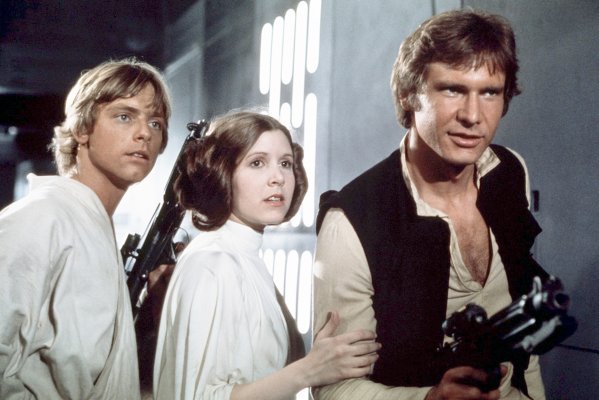 Harrison Ford Gave Alden Ehrenreich the Most Han Solo Advice About Joining the Star Wars Universe
Next Up: Editor's Pick