House Minority Leader Nancy Pelosi held the House floor for eight hours Wednesday, setting a record for the longest continuous speech delivered in the chamber as she shared the stories of young undocumented immigrants and urged Republican House Speaker Paul Ryan to bring a vote on immigration legislation.

Pelosi’s speech comes as lawmakers struggle to agree on a plan for recipients of the Obama-era Deferred Action for Childhood Arrivals program (DACA), which protected undocumented immigrants brought to the U.S. as children from deportation. President Trump announced last year that he would end the program, leaving DACA recipients — often called Dreamers — in limbo as the program is set to expire.

“Every day, courageous, patriotic Dreamers lose their status. Every day, the American dream slips further out of reach,” Pelosi said, beginning to speak at 10:04 a.m. on Wednesday. “As members of Congress, we have a moral responsibility to act now to protect Dreamers who are the pride of our nation and are American in every way, but on paper.”

“There’s nothing partisan or political about protecting Dreamers. If a Dream Act were brought to the floor, it would pass immediately with strong bipartisan support,” Pelosi added. “Yet our Dreamers hang in limbo with a cruel cloud of fear uncertainty above them. The Republican moral cowardice must end.”

The House historian’s office said Pelosi appears to have broken a record set in 1909 by Missouri Rep. Champ Clark, who spoke for five hours and 15 minutes about a tariff overhaul. “It’s important to note that although Clark held the floor for the duration, he was repeatedly interrupted during his remarks,” the House historian’s office said in a statement. “We’re not certain that Clark held the record for the longest speech at the time, but it is the longest example we’ve been able to find on short notice.”

While House rules have limited the length of time that members are allowed to speak, those limits do not apply to the majority and minority leaders or to the speaker of the house. 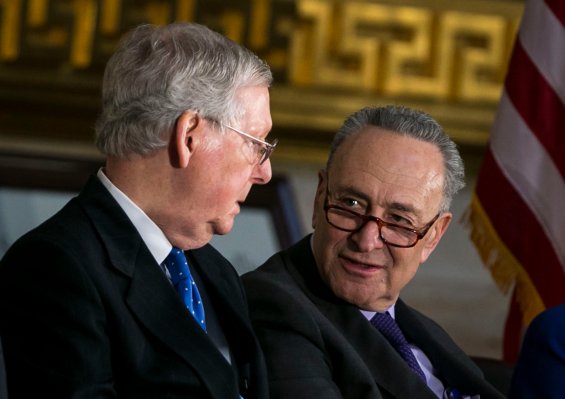