All the Medals the U.S. Has Won in the 2018 Winter Olympics

The United States finished fourth at the 2018 Winter Olympics in PyeongChang, South Korea with 23 medals — nine of which were gold — with a number of historic wins and disappointing finishes.

U.S. snowboarders dominated their events this year, with 17-year-old phenom Chloe Kim and veteran Shaun White earning gold in their halfpipe events, among other U.S. snowboarding wins, while the U.S. figure skating team failed to collect any men’s or women’s individual event medals despite athletes landing some historic jumps and earning bronze as a team earlier in the Games.

But what, perhaps, will be most memorable about the 2018 Winter Games for PyeongChang was the number of historic performances where underdogs landed on the top of the podium. The women’s ice hockey team ended a 20-year drought with a thrilling win against arch rival Canada, and the men’s curling team not only made its first appearance in the sport’s gold-medal match, but also won. In the two-person relay event, cross-country skiers Kikkan Randall and Jessica Diggins also took home a historic gold medal with the team’s first-ever gold-medal win in the sport. Chris Mazdzer also made history when he scored silver — the first men’s Olympic luge medal of any kind in U.S. history.

Overall, however, the U.S. fell short of its second-place performance in 2014 in Sochi, where the team earned 28 medals. At these Games, Norway came out on top with 39 total medals and 14 golds. Germany and Canada claimed second and third, respectively, ahead of the U.S.’s fourth-place finish. The International Olympic Committee banned Russia, the 2014 overall champions, from competing this year due to doping, so the 169 athletes from the country who were cleared to compete did so under a nameless flag. They still managed to snag a number of medals, tallying 17 in total.

Here’s are all the medals Team USA won at the 2018 Winter Olympics.

Chloe Kim of the U.S. competes in the Women's Halfpipe Qualification on Feb. 12, 2018.
Dylan Martinez—Reuters

Chris Mazdzer of the United States celebrates after he won silver in the Luge Men's Singles on Feb. 11, 2018.
Ezra Shaw—Getty Images 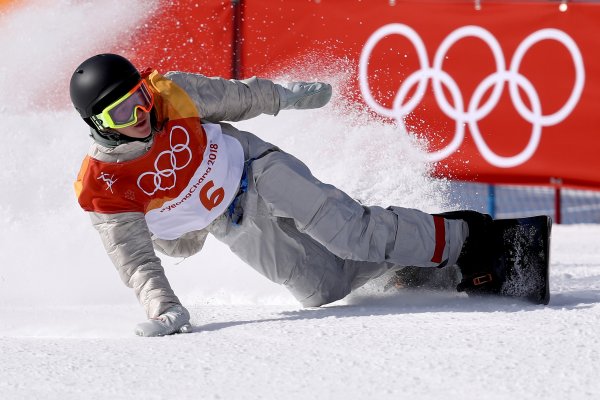