By Nash Jenkins and Philip Elliott

At the risk of jinxing it: Congress might actually work together across party lines to fix a years-old problem with its budgets.

In a rare moment of bipartisanship, Senate leaders from both parties have put together a two-year budget deal that would lift arbitrary spending caps on military and domestic spending put in place in 2011 and 2013 that neither party likes.

“This bill is the product of extensive negotiations among congressional leaders and the White House. No one would suggest it was perfect, but we worked hard to find common ground and stay focused on serving the American people,” Senate Majority Leader Mitch McConnell said. “While I obviously cannot guarantee any outcomes, let alone supermajority support, I can ensure the process is fair to all sides.”

Immediately after, his Democratic counterpart, Sen. Chuck Schumer, called it “the first real sprout of bipartisanship” and saying the deal’s general principles had been agreed on. “After months of legislative logjams, this budget deal is a genuine breakthrough,” Schumer said on the Senate floor.

It was a rare show of bipartisan dealmaking at a time when the two parties are farther apart than they’ve been in years. With Republicans in control of both chambers of Congress as well as the White House, Democrats have been sidelined on everything from a sweeping tax bill passed in December to long-stalled efforts to address the status of undocumented immigrants brought to the U.S. as children.

With a commitment from McConnell to address the Dreamers’ issue before the Deferred Action for Childhood Arrivals program expires in early March, both sides chose instead to resolve the ongoing spending deadline crises while addressing the years-old problem of spending caps, a thorn in the side of both parties now for the better part of a decade.

Senate Democrats say the deal is far from perfect, but it largely settles the spending crises until the fall officially, but more likely until the lame-duck session between November’s Election Day and January’s seating of those elected in those contests. It is in that lame-duck, when politics is at its nadir of an election cycle, that a true long-term solution may be found.

The prospects to get that far, however, are uncertain in the House. While Republicans enjoy a majority in the lower chamber, aides expect several fiscal conservatives to balk at the pricetag and demand austerity, especially on the domestic side of the ledger. That means Ryan will need Democratic votes to get it across the finish line. Democrats may refuse to go along unless the spending measure comes with a promise to quickly take up protections for immigrants in the country illegally.

Earlier in the day, Democratic Leader Nancy Pelosi told her House colleagues that she likes the spending piece of the proposal because it includes several priorities for his caucus, especially the funding for childcare, community health centers and job training programs. But, as was the case three weeks ago when Democrats triggered a brief shutdown, Democrats were still demanding action on immigrants.

But Congress faces this choice: approve the money, or close the doors of the government for the second time this year. It’s as simple as that. As an added bonus, they will be able to tell their constituents that they busted the capricious spending caps and, for those whose districts care, delivered a win for Trump.

One White House official said the President is “generally supportive” of the deal. In other words, he likes it — until he doesn’t. As so often happens, something on cable news could still trigger Trump, leading him to upend the legislative team’s strategy. Just look at his Tuesday comments indicating he wanted a government shutdown.

Setting aside the politics, the deal indicates an adult approach to compromise.

Defense hawks have long sought to restore funding for military programs that saw their budgets shrunk as a result of the automatic, across-the-board cuts that were part of a deal to avoid previous shutdowns. Sen. John McCain, the chairman of the powerful Senate Armed Services Committee, has hammered this issue for years. While McCain is absent and undergoing treatment for cancer, his staff has been continuing the fight relentlessly. Under the proposed terms, Congress would restore the funding and then add some.

Meanwhile, Democrats have been working to restore funding for domestic programs, especially to community health programs that suffered under the spending caps.

On top of this, the spending outline would provide disaster relief for areas hit in last year’s storms. Funding for such requests are typically routine, but a confluence of competing demands left it in the to-do pile far longer than is typical.

For some Democrats and more Republicans than the White House may realize, the spending outline has one added bonus: it effectively circumvents Trump’s budget requests that gut programs like environmental protection, diplomacy, small business assistance, public art and education.

If Congress can sign off on the spending at the levels its members want, it all but mutes the President’s budget request expected to be released on Monday. 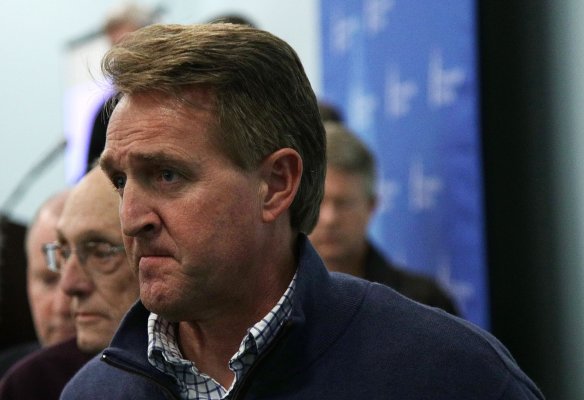