'Put Me Down as a No.' These Retired Generals Are Not Happy About President Trump's Military Parade

A number of retired high-ranking military officials have spoken out about Trump’s orders for the Pentagon to begin planning a big parade, likely in Washington, D.C., since it was reported Tuesday evening by the Washington Post.

Among their objections: Military parades have traditionally been the hallmarks of totalitarian regimes, appearing in the parade would be an unwelcome distraction for rank-and-file servicemembers and it would make it seem like the military is promoting the president and not serving the Constitution.

Read More: President Trump’s Military Parade Is Likely to be a Logistical Nightmare

“A lot of countries have histories of longtime military conquest and the power and strength of the military supporting the government, but since our inception that has not been who we are,” he said. “We’re the only nation in the world that defends a piece of paper. An ideology. And to say we’re going to strut our stuff with tanks and rocket launchers and things like that, is just not a good representation of what the military does in a democratic nation.”

Other military officials found troubling Trump’s desire for a parade, reportedly sparked after viewing a Bastille Day celebration in France, especially since it came just days after he declared — jokingly, his advisers argued — that Democratic lawmakers who did not clap for him at the State of the Union were “treasonous.”

“Donald Trump has continually shown himself to have authoritarian tendencies and this is just another worrisome example,” said Retired Major General Paul Eaton, a Senior Adviser VoteVets, a progressive political organization devoted to electing veterans to office. “For someone who just declared that it was ‘treasonous’ to not applaud him, and for someone who has, in the past, admired the tactics of everyone from Saddam Hussein to Vladimir Putin, it is clear that a military parade isn’t about saluting the military — it is about making a display of the military saluting him.”

“I used to watch them in Bulgaria,” retired Air Force Gen. Michael Hayden, former director of the CIA and National Security Agency, said on Twitter of these type of parades, another reference to the association of these events with totalitarian regimes. “Put me down as a no,” he added.

Other former military officials were concerned that the parade would be antithetical to the military’s principles.

“I’ll let military friends speak for themselves, hoping they don’t just salute Trump, but when I served in the U.S. Army, the LAST thing we wanted to do was parade,” tweeted John McLaughlin, who served in the CIA under the Clinton and George W. Bush administrations.

Hertling added that, in the end, the parade would not actually be for the troops.

“I think having a parade in the middle of the nation’s capital is obviously not for the soldiers, it’s more for the people that watch,” Hertling continued. “And in this case it’s one particular person and that’s the President.” 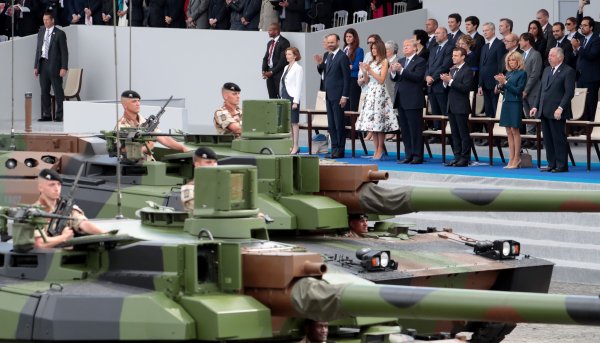 President Trump's Military Parade Is Likely to Be a Logistical Nightmare
Next Up: Editor's Pick