Eager to show off American military might, President Donald Trump has tasked Pentagon planners to design an attention-grabbing parade in the nation’s capital bristling with warplanes, hulking vehicles, and marching uniformed service members.

“President Trump is incredibly supportive of America’s great service members who risk their lives every day to keep our country safe,” White House spokeswoman Sarah Sanders said. “He has asked the Department of Defense to explore a celebration at which all Americans can show their appreciation.”

Regardless of how large the event turns out to be, the undertaking poses a logistical challenge that will almost certainly cost millions of dollars. The Pentagon said it was in the midst of planning “specific details” for the parade, which was first reported by the Washington Post, but didn’t provide additional information.

Getting a wide-array of military equipment from across the nation — in some cases, the world — into Washington, along with the technicians, mechanics, and support staff, will not be easy. It may also prove difficult to choose which units to showcase, what uniforms they should wear, what equipment they should carry, and when they’re available.

Streetlights had to be removed. The 67-ton tanks punched deep tread marks into the pavement. An army of 1,000 workers picked up heaps of trash left behind by the crowd of 200,000 (later estimates said crowds swelled to 800,000.)

The parade cost $12 million, which amounts to about $22 million adjusted for inflation in 2018.

Another hurdle is where to host the event. The National Park Service maintains lengthy protocols in hosting national celebrations on Pennsylvania Ave., where the president has indicated it should take place. The Pentagon also has a laundry list of rules and regulations regarding parades, which are laid out in a 43-page Department of Defense directive from 2001.

The idea for the parade came after Trump attended a national event in Paris for Bastille Day, a July 14 holiday marking the storming of the Bastille prison in 1789. The event is widely considered the beginning of the French Revolution, so the French carry out an annual military parade that features marching troops and high-tech weaponry.

“To a large extent because of what I witnessed, we may do something like that on July 4th in Washington, down Pennsylvania Avenue,” Trump told French President Emmanuel Macron in September before a bilateral meeting as part of a series of United Nations events.

“I don’t know, we’re gonna have to try to top it,” he said. “But we had a lot of planes going over, we had a lot of military might. It was a really beautiful thing to see.”

It wasn’t the first time Trump flirted with showing off fighting hardware. The Huffington Post obtained emails last year from his staffers asking about deploying heavy military equipment in his inaugural parade on Jan. 20, 2017. The email exchange revealed the complexities of a seemingly simple request by the Trump team when a Pentagon official told them they needed time “to make deliberate decisions about vehicle choice and configuration, paint scheme, uniform for crew members, etc.”

No equipment, except fighter jets, were approved for the event. All flyovers were ultimately canceled, however, due to inclement weather. 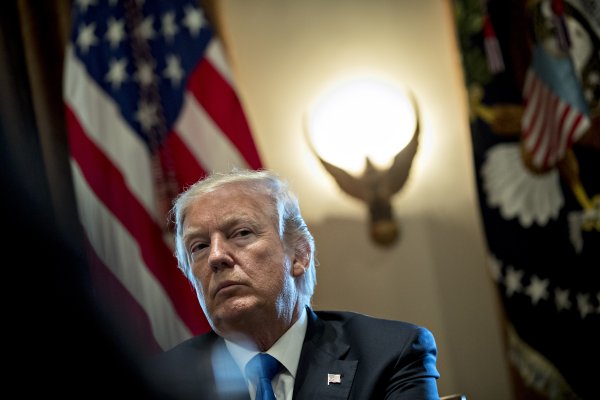 White House Responds to Historic Dow Plunge: 'Focus Is on Our Long-Term Economic Fundamentals'
Next Up: Editor's Pick