Elon Musk’s SpaceX launched its new Falcon Heavy rocket for the first time Tuesday, a major milestone in the company’s quest to grow its customer base and fund its vision of making life multiplanetary.

With fans gathered along the Florida space coast and millions watching on webcast, the new rocket rumbled to life shortly after 3:45 p.m. local time. It cleared the launch pad without blowing up — a feat Chief Executive Officer Musk said would signal a win — and continued on in an attempt to deliver its test payload into an Earth-Mars elliptical orbit around the sun.

Falcon Heavy is a large, reusable launch vehicle that will allow the closely held company to bid on heavier payloads than it can with its Falcon 9, such as big commercial satellites and national security missions.

Following the launch, SpaceX did something never before seen in space history: It re-landed multiple rocket cores back on earth. Two touched down on land, and the plan for the third was for it to settle back on an unmanned drone ship in the Atlantic Ocean. The video feed on the drone ship cut out before the company could confirm whether it landed successfully.

The Hawthorne, California-based company already has paying customers committed to flying with Falcon Heavy, including commercial satellite operators Arabsat, Inmarsat and Viasat, according to its launch manifest. The U.S. Air Force also chose Falcon Heavy for its STP-2, or Space Test Program 2, mission, though it still needs to go through certification.

The payload for Tuesday’s maiden flight was Musk’s cherry red Tesla Roadster sports car, outfitted with cameras to capture the views. A nearly indestructible disk carrying a digital copy of Isaac Asimov’s science fiction book series, Foundation, is also on board, plus a plaque engraved with 6,000 SpaceX employees names. 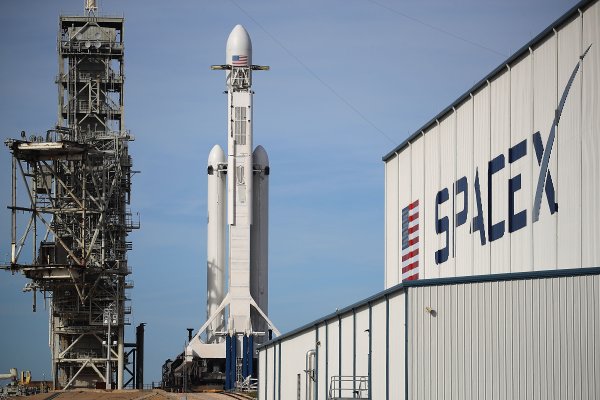 SpaceX Launches the Falcon Heavy Rocket
Next Up: Editor's Pick