In a case viewed as a crucial test of Hong Kong’s judicial independence, an appeals court has ruled to free three prominent activists who were facing prison terms for their role in massive pro-democracy protests that shook the semi-autonomous region of China in 2014.

The successful appeal was seen as a major victory for the trio, who last week were nominated for a Nobel Peace Prize. The nomination, and the criminal charges against them, was related to their role in spearheading the Umbrella Movement, a 79-day peaceful occupation of the city demanding greater political autonomy.

Supporters queued outside the courthouse as the trio arrived, many wearing the bright teal T-shirts emblematic of their political party, Demosistō. Once convened, the hearing lasted roughly 10 minutes; supporters and journalists streamed out of the courtroom looking perplexed by the surprise ruling.

The three were initially sentenced to community service for their role in a demonstration that helped kickstart to Umbrella protests, during which tens of thousands of mostly young people flooded Hong Kong’s financial and government center and brought the city to a standstill for months. The demonstrations, originally planned to oppose Chinese interference in the city’s elections, soon swelled into a broader movement for democracy and political autonomy.

But in August, prosecutors reopened their case to seek harsher punishment; their prison sentences of six to eight months effectively barred them from office for five years and earned them the label of Hong Kong’s first prisoners of conscience. The move was broadly seen as an attempt to sideline the popular young pro-democratic figures and intimidate other activists. Just before the hearing, Chow told TIME that “it is getting clearer, that the red line is pushing forward, and room for resistance is shrinking.”

Tuesday’s ruling was welcomed by their supporters. Wong and his co-defendants cautioned, however, that though they had been spared sentences the ruling could still signal that the city is losing tolerance for dissent. The court’s language emphasized that “future offenders involved in large scale unlawful assemblies involving violence” may face harsher punishment. Wong, Law and Chow reject allegations of violent demonstration. 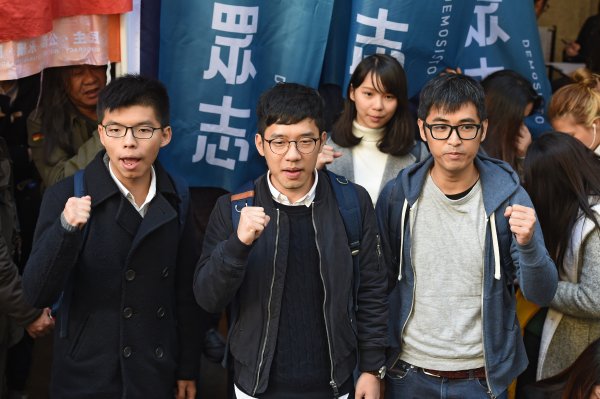