A North Korean ferry that was gifted to Kim Il Sung is charting a course to the Olympics, complete with ice cream, karaoke and 140-person strong orchestra, Reuters reports.

The ferry, called Mangyongbong 92, last visited the south 16 years ago when it transported a cheer squad to the 2002 Asian Games in Busan, according to Reuters. Seoul has temporarily lifted its ban on North Korean ships as part of the Olympic truce, which it hopes will ease nuclear tensions and pave the way for improved inter-Korean relations.

Pro-Pyongyang Koreans living in Japan gave the vessel to national founder Kim Il Sung — current leader Kim Jung Un’s grandfather — in 1992 for his 80th birthday. In addition to lodgings fit for the Supreme Leader, the ferry includes a restaurant, a karaoke bar and a souvenir shop. North Korean pop singer Hyun Song Wol is also reportedly onboard, and will be performing in Gangneung, near the games venue Thursday, and in Seoul Sunday.

Read more: North and South Korea Made Peace for the Olympics. But It Won’t Last

But the ferry hasn’t always been associated with fun and athletic games. Japan and other countries in the region barred the ship from their waters after they suspected it was being used to smuggle parts for North Korea’s nuclear and missile program. Pyongyang has rejected the accusation, calling it propaganda meant to “justify the hostile policy” of the U.S. and its allies.

South Korea’s Unification Ministry told Reuters that the Mangyongbong 92 will be used for transportation and lodging during the PyeongChang Winter Olympics, which are set to start on Friday. The ferry will be escorted to the port in Mukho, a seaside town about two hours from the Olympic stadium. 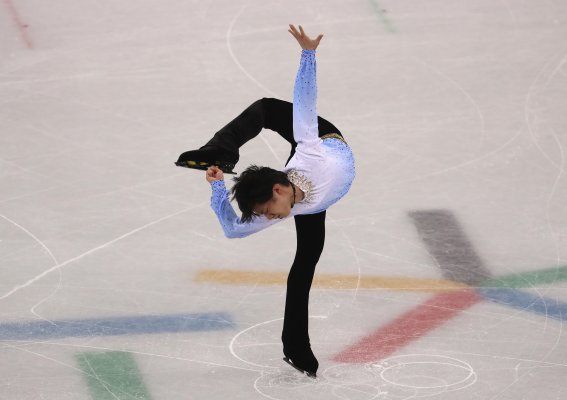 5 Things to Know About Japan's 'Ice Prince' Yuzuru Hanyu
Next Up: Editor's Pick