America Is No Longer the Standard Bearer for a Free Press

Brown is executive director of the Reporters Committee for Freedom of the Press.

When I joined the board of the Inter American Press Association in 2015, I expected one day I would be a part of the delegations the organization sends to hotspots in the Americas when the rights of the news media are under attack. These advocates go to the worst places in the hemisphere for journalists and meet with government officials to try to defuse tensions.

I could not have imagined that a few years later we would be welcoming an IAPA mission to the United States. But that is exactly what we will be doing this week when journalists from Venezuela, Argentina, Peru and Mexico come to Washington, D.C., for meetings with legislators, policymakers and the American media about the undermining of press protections in this country.

The arrival of the delegation will invert long-standing assumptions about the place of our country in the world. U.S. members in IAPA had generally seen their role as exporting free-press principles south of the border, given the strength of our First Amendment and the stable public consensus around press freedoms at home.

No longer. The mobilizing is here, and organizations such as mine are now on the frontlines.

From the misuse of antitrust law in Argentina to “enemies of the homeland” rhetoric in Venezuela to physical attacks and murder in Mexico, journalists from Latin America have experienced firsthand the corrosive impact of assaults on free expression. They are in a unique position to help us better appreciate what we are facing in the U.S. — and where we might be headed if we do not defeat the virulent strain of press hatred stoked by President Trump.

It’s not enough anymore to simply assert that the President is breaking every American norm. We must study other societies and see what strategies they have used to recommit themselves to press freedom.

In 1994, IAPA organized a hemispheric free press movement behind the Declaration of Chapultepec, a set of principles to strengthen protections for journalists now signed by 31 countries, including the U.S. “No people or society can be free without freedom of expression and of the press,” reads the first of the declaration’s ten points. In the years since, the Internet has made it all but impossible for democratic governments to directly censor the press; prior restraint is now hard to pull off, even for an autocrat.

But governments today are exploiting other judicial tools — and many extrajudicial ones — to denigrate the work of the free press. A friend recently told me about a conversation with her teenagers after taking them to see The Post, Steven Spielberg’s new film about the legal fight over the Pentagon Papers. Her children wondered why President Nixon bothered with seeking a court injunction to stop publication when he could have just called it fake news.

That is another area where we in the U.S. have something to learn from Latin America. The novelist Gabriel Garcia Marquez understood what happens when societies cannot agree on basic facts. One Hundred Years of Solitude is haunted by the mass shooting of Colombian civilians by government troops in 1928 during a strike by banana workers. The historical record of the actual incident was long in dispute, and in Garcia Marquez’s fiction that failure to come to terms with truth is transformed into a mysterious amnesia gripping the people. The government denies the attack, and a single character is left for the rest of the novel trying to convince the town that the massacre even took place. Fake news, indeed.

It has been evident for some time that the story that matters going forward is not Trump’s but ours. No president gets to jail journalists or reopen libel laws on his own. The press is protected by judges and juries, by lawmakers in Congress and in state and local governments, by an independent-minded Justice Department in Washington and by a public that relies on the free flow of news to govern itself in a complex world. Freedom of the press is ours to save, not Trump’s to burn. 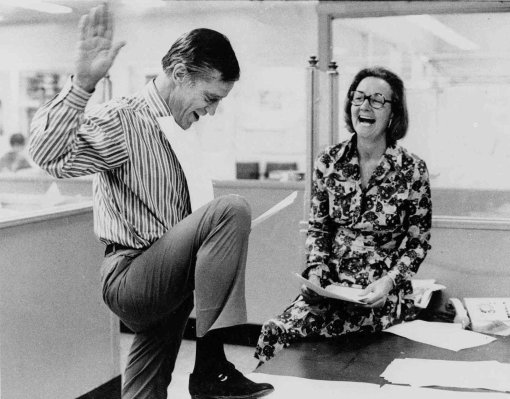 'A Frightening Time in Our History': What Americans Really Thought About the Pentagon Papers
Next Up: Editor's Pick