For the Super Bowl LII Halftime Show, Justin Timberlake came to Minneapolis ready to make a splash. One of his biggest statements: his choice of attire. The Man of the Woods singer and three-time Super Bowl performer started things out in camo-print pants, a shirt emblazoned with a landscape (including a deer), a fringed leather jacket, a red bandana around his neck and special edition Nike Air Jordans. It was an eclectic mashup of styles that had many scratching their heads — and others nodding to his latest album title to understand his inspiration.

His dance-heavy performance, which saw him bringing back past hits like “Mirrors” and “Cry Me a River,” mixing in new single “Filthy” and singing a duet with a projection of Prince, was filled with props and even a costume change when he swapped his leather jacket for a matching camo suit blazer. (That was for “Suit and Tie,” naturally.) But the outfit really got the internet joking. The look has high fashion bona fides, as it was custom designed for Timberlake by Stella McCartney. Yet there were still plenty of hot takes to be had on Twitter.

And then there was the Bob Ross take. 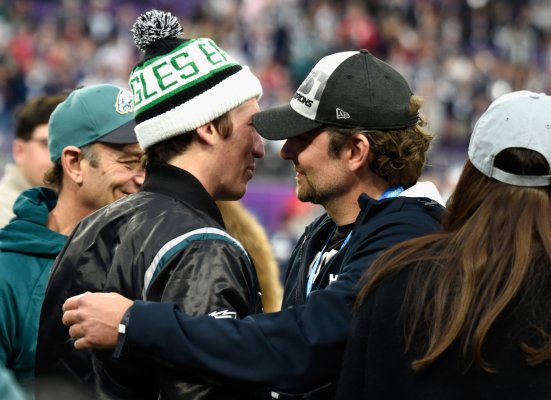 Find Someone to Root for You Like Bradley Cooper Supports the Philadelphia Eagles
Next Up: Editor's Pick