Not only did the Oscar-nominated actor narrate a powerful Eagles video with the appropriate gravitas for the winning team’s magical season, but as he aggressively watched his home team go for the Lombardi Trophy at the Super Bowl game, he gave a performance so rich with emotional depth he went viral.

Cooper watched the thrilling game from the owner’s box, but of all the A-listers in the mix, including selfie kid, he was the most engaged. The internet really loved watching him ride for Philly.

That’s why it shouldn’t be so surprising that in the movie Silver Linings Playbook, Cooper played a diehard Eagles fan. From the photo evidence of his feelings below, it was the gig he was born for.

As an adult man with passion, his heart was bursting with the joy of an entire Philly street. His investment in the game is every climbed pole. His unshakable love of his team is every celebratory cheesesteak.

Of course, it wasn’t just Eagles fans who swooned for Cooper. His excitement was infectious for many. You may now use this meme to encourage your friends and spread joy across the internet. 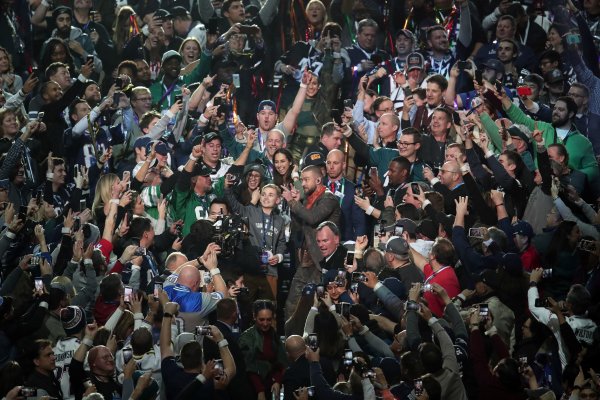 The 'Selfie Kid' Who Stole Justin Timberlake's Halftime Show Was the Real Super Bowl MVP
Next Up: Editor's Pick