North Korea’s ceremonial head of state will lead a delegation to the South amid an easing of tensions that could pave the way for high-level talks on the sidelines of the Winter Olympics in PyeongChang.

Kim Yong Nam, president of the Presidium of the Supreme People’s Assembly, will attend the Olympic opening ceremony Friday and stay in the South until Feb. 11, according to a Reuters report citing North Korea’s KCNA news agency.

Kim is the highest-ranking North Korean official to visit the South since 2014, the BBC reports. He serves as the nominal leader of North Korea’s parliament, while Supreme Leader Kim Jong Un rules the nation.

Read more: Here Are All the Dates and Locations You Need to Know For the 2018 Winter Olympics

Vice President Mike Pence and Japan’s Prime Minister Shinzo Abe are expected to be among the world leaders attending the opening of the games.

A White House official told Reuters that Pence will focus on countering a perceived effort by Pyongyang to “hijack” the Olympics with a North Korean propaganda campaign.

The North’s participation is seen as an effort to recast the pariah state’s international image, shifting the focus from its nuclear program and political oppression.

Aside from possible talks, Seoul is pushing peacemaking through inter-Korean unity at the games. Athletes from the two Koreas are expected to walk together under the same flag at the opening event and a joint women’s ice hokey team will represent the two technically still-warring nations. 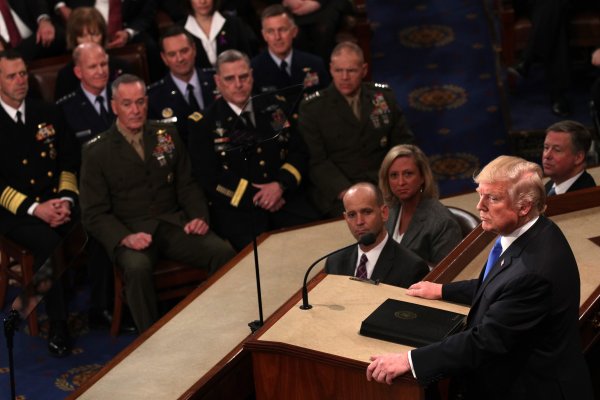 Trump Was Calmer About North Korea This Time. That's a Sign He's Taking it Seriously
Next Up: Editor's Pick