Justin Timberlake sang one of Prince’s songs during his 2018 Super Bowl halftime show, eliciting a negative response from some fans of the late and legendary artist.

During his set, which was filled with new and old songs, Timberlake performed Prince’s “I Would Die 4 U” with a video of the artist singing his 1984 classic projected on a screen at the U.S. Bank in Minneapolis. The tribute to the Minnesota native also featured the surrounding city outside of the stadium lit up in purple. Prince died in April 2016.

The performance, however, stumped some fans who had criticized Timberlake for reportedly considering the use of a hologram to show Prince performing during the tribute. That version of the performance did not happen. Prince himself once said using a hologram to represent a dead artist would be “the most demonic imaginable.”

Still, the tribute with a video of Prince performing as Timberlake sang along and played piano upset some viewers, who expressed their disappointment on Twitter.

The tribute also comes as Prince fans revive details of the dispute between Prince and Timberlake almost a decade ago. Back when Timberlake’s hit “SexyBack” came out, Prince reportedly joked that “sexy never left,” according to TMZ. In response, Timberlake mocked Prince’s short stature when he accepted a Golden Globe for Best Original Song on Prince’s behalf in 2007, and dissed Prince on his verse in Timbaland’s “Give It To Me.”

Some said they don’t believe Prince would have been pleased with the performance, while others appeared to joke that the ghost of Prince would haunt Timberlake.

Over the weekend, Prince’s bandmate Sheila E. said she spoke with Timberlake about the tribute, noting that “he shared heartfelt words of respect for Prince & the Purple fans” and there would be no hologram.

Prince performed at the Super Bowl XL Halftime Show in 2007.

Other viewers shared positive reviews of Timberlake’s tribute. That includes Federal Communications Commission Chairman Ajit Pai, whose comments came after the FCC had fined CBS $550,000 after Timberlake had exposed Janet Jackson’s breast during the Super Bowl halftime performance in 2004.

Timberlake’s performance was shrouded in controversy, as it was his return to the Super Bowl stage following the incident in 2004. Fans of Janet Jackson were disappointed with the choice of Timberlake and not Jackson to return to the stage, and some took to Twitter ahead of the Super Bowl on Sunday to share their appreciation for her.

Over the weekend, Jackson ended speculation that she would make a surprise appearance in Timberlake’s halftime show. Timberlake went on to include “Rock Your Body,” the song in which the infamous incident occurred in 2004, in his set. 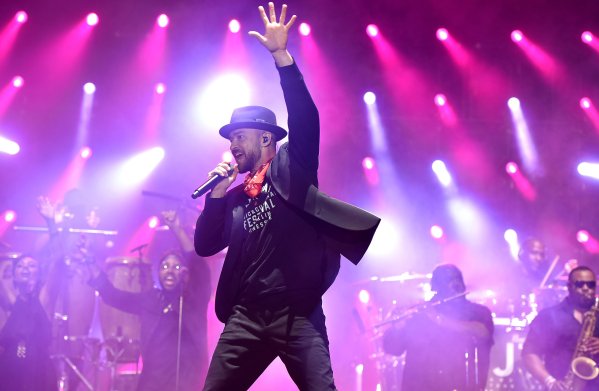 Justin Timberlake Was a Man in the Weeds at His Super Bowl Halftime Show
Next Up: Editor's Pick