In a first for the movie industry, Netflix announced the next sequel to Cloverfield, Cloverfield Paradox, will be available to stream immediately after Super Bowl LII Sunday night.

The Cloverfield Paradox, the highly anticipated third iteration of the 2008 sci-fi thriller, was announced in a surprise ad during the first half of the Super Bowl. The film, originally titled God Particle, was directed by Julius Onah and features Elizabeth Debicki, Gugu Mbatha-Raw, David Oyelowo, Chris O’Dowd and was produced by J.J. Abrams.

The surprise Super Bowl announcement was the first time fans got a glimpse of the new film with a trailer – with the added detail that it would premiere on Netflix Sunday night, fans took to Twitter to celebrate.

Director Ava DuVernay also shared her excitement for Cloverfield Paradox on Twitter, where she called the film and its release a “gamechanger.” She noted that it stars and was created by people of color and congratulated the Cloverfield cast and its director.

Cloverfield Paradox will follow a group of astronauts who make a “horrible discovery,” according to the film’s IMDB page. 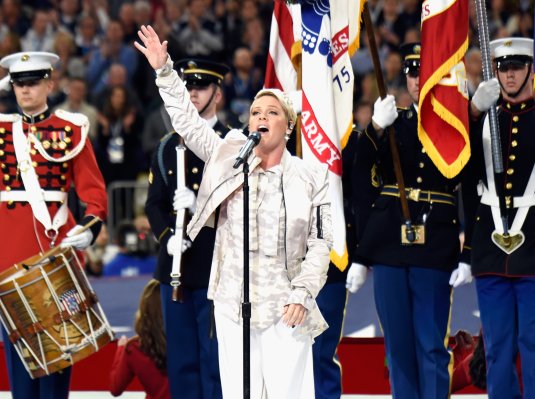 Pink Singing the National Anthem With the Flu Won the Super Bowl Before It Even Started
Next Up: Editor's Pick