If performing for one of the largest audiences in the world is not already enough pressure, imagine doing it with the flu.

That’s what Grammy Award-winning artist Pink had to do ahead of the Super Bowl LII Sunday when she performed the National Anthem as this year’s competitors, the New England Patriots and Philadelphia Eagles, looked on. Pink, who had a goal of performing the National Anthem at the Super Bowl after she saw Whitney Houston do so in 1991, battled through the flu Sunday — and her fans came flocking to Twitter to voice praise and admiration for singing while sick.

One Twitter user said, “Anyone who can sing the national anthem while having the flu with such grace is a legend in my book.” Another simply said, “All hail Pink.”

Pink announced she had the flu just ahead of her performance in an Instagram post, that showed her practicing at the stadium in Minneapolis. She blamed her “two small Petri dish kids who literally cough INTO MY MOUTH” for the illness, and wrote that she “arrived at another one of my dreams which is slowly becoming a sort of nightmare.”

Still, Pink wrote, she would give it her all. “I will tell you, this is one of the biggest honors of my life, singing this song in front of my family, my military family, my dad and brother and step mama and family and the world,” she added. “And the EAGLES!?!?! I promise I will do my best, as I always do.”

It appeared Pink was still battling the flu just moments before she was set to sing the National Anthem at the Super Bowl Sunday night. Some eagle-eyed fans (no pun intended) spotted the singer spit out what appeared to be gum or a cough drop.

The singer later cleared up the gum vs. cough drop debate online with a simple tweet.

As for the match-up between the Eagles and Patriots, Pink has a clear favorite. She’s a life-long Eagles fan. 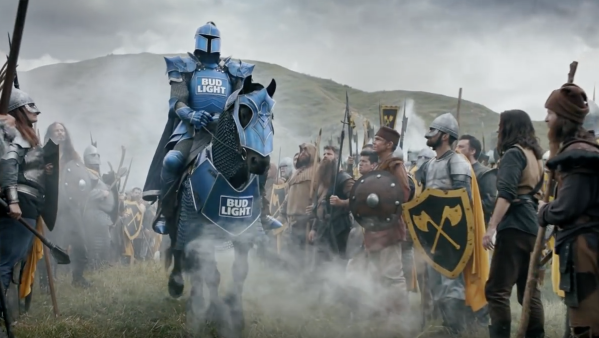 Bud Light's Hilarious Super Bowl 2018 Commercial Is Here to Help You Party Like It's Medieval Times
Next Up: Editor's Pick