Even NASA robots snap selfies, though theirs are far less mundane than the hundreds you have on your phone. This week, NASA’s Jet Propulsion Laboratory shared one taken by the Curiosity Mars rover, which is currently exploring the red planet.

Curiosity’s self-portrait was taken on Vera Rubin Ridge, and behind it is an image of Mount Sharp. The rover, which has been on Mars for five years, has a mission to study lower Mount Sharp and its “clay-rich” slopes. “The mountain’s base provides access to layers formed over millions of years,” according NASA’s JPL. “These layers formed in the presence of water—likely due to a lake or lakes that sat at the bottom of the mountain, which sits inside Gale Crater.”

The photo itself is actually a mosaic of images taken on Jan. 23, 2018 by Curiosity’s Mars Hands Lens Imager (MAHLI), and Curiosity’s arm or the MAHLI camera aren’t in the shot. “Wrist motions and turret rotations on the arm allowed MAHLI to acquire the mosaic’s component images,” NASA explains on its website. “The arm was positioned out of the shot in the images, or portions of images, that were used in this mosaic.”

Earlier this week, NASA also shared a panoramic view from a mountainside on Mars, which was captured three months ago by Curiosity’s Mast Camera. Curiosity landed in the Gale Crater in 2012 and the image, also from Vera Rubin Ridge, captures the 11-mile journey up the crater that the rover has made since landing.

“Even though Curiosity has been steadily climbing for five years, this is the first time we could look back and see the whole mission laid out below us,” Ashwin Vasavada, a Curiosity Project Scientist at NASA’s Jet Propulsion Laboratory, said in a statement. “From our perch on Vera Rubin Ridge, the vast plains of the crater floor stretch out to the spectacular mountain range that forms the northern rim of Gale Crater.” 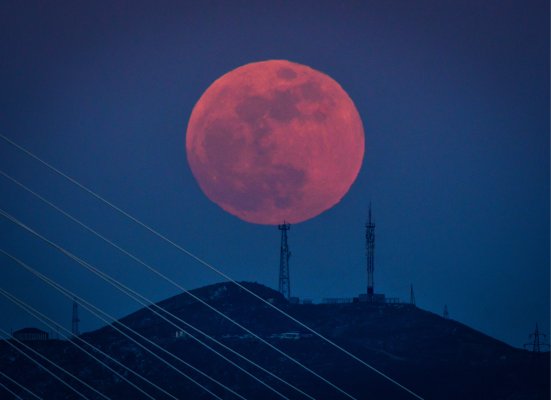 Stunning Photos Show 'Super Blue Blood Moon' Eclipse All Over the World
Next Up: Editor's Pick