When House of Representatives released the so-called “Nunes memo” Friday, the news was one more step in a wave of controversy that has called into question the relationship between U.S. intelligence and the nation’s elected officials.

The GOP memo, produced by the House Intelligence Committee under committee chair Rep. Devin Nunes, contains allegations that suggest misconduct in the FBI’s investigation of Russian interference in the 2016 election. The decision to release it, against the wishes of the FBI and some politicians in both parties, represents a major shift in intelligence oversight, the process through which Congress and others are able to check the actions of agencies such as the FBI.

But the world of intelligence oversight wasn’t always so fraught. For much of the nation’s history, intelligence gathering proceeded largely with bipartisan support and little questioning. That began to change in the last several decades.

He’s now Regents Professor of Public and International Affairs at the University of Georgia and the author of the new book Spy Watching: Intelligence Accountability in the United States. He spoke to TIME shortly before the memo was declassified on Friday about why the release of the controversial document is such big news. An edited transcript of that conversation follows.

TIME: It must be quite a time to be studying this topic. What’s your reaction, as an expert on this topic, to the news breaking this week?

JOHNSON: It is an extraordinary event to have the majority on the [House Intelligence] Committee decide to release a document with classified material in it, especially in light of the fact that the FBI has cautioned against releasing it. It does raise a question of great importance, a broader question, of when Congress should have the right to release classified information. This has been debated off and on.

I’ll tell you a story from the Church Committee days, in 1975: We did an assassination report, which was highly classified and very controversial, and Senator Church, Democrat of Idaho, decided to take it to the floor as an informational exercise. But when he got to the floor, many Senators, particularly Republicans, said, ‘You can’t release this information without a formal vote!’ And Church and a few others said, ‘We’re not here to take a vote. We’re here to make sure the Senators are not blindsided by the media and they know what this report is.’ So that was one approach, I think a rather brazen one, on behalf of Frank Church, even though I was his aide. I’m not sure that that report should have been released without a more formal procedure.

Another aspect of this, which I think is significant, is that the Republicans on the House Intelligence Committee objected to the Democrats releasing a rebuttal, which also had some classified information in it. As you may recall, back when [Sen. Dianne] Feinstein was investigating the torture report, she at least made it possible for the opponents to release a dissenting report.

Many people, including the President, have bemoaned the politicization of this process. Was it ever really apolitical?

From 1947, when the CIA was created, up until about 1992 — so that’s quite a sweep of time — when it came to intelligence, there was pretty much bipartisan unity. There were a couple of episodes during the ’50s and ’60s in which Mike Mansfield and a couple of others introduced proposals to reform the oversight process and make it more formal, but they were quickly defeated by both the House and the Senate. It used to be that people were so proud that [intelligence] was above the partisan fray, with the exception of the efforts of the Reagan Administration to conduct covert action in Nicaragua despite the Boland Amendment [limiting such actions]; that led to the initial friction, but since then it’s become commonplace. I think part of what happened there is that Newt Gingrich came along and his theory was to so denigrate the Democrats that maybe the American public would finally turn to the Republicans and make them a majority. And in fact it worked, but unfortunately it made Washington a horrible place to be, and there’s so much hostility now.

You point to 1992, which is interesting to me, since it seems to me that the 1970s were when so much was changing in this world — you have the Church Committee, you have FISA, you have leaks, you have the post-Watergate disenchantment with the idea that government can be trusted…

Here’s the distinction I would make. Given the Watergate backdrop as well as the mendacity that accompanied the Vietnam War, there was a turn against the government by the public, and also the representatives in Congress. And the Church Committee made it clear that accountability and safeguards would apply not only to the open part of government but to the secret part of it to. But having said that, even after the Church committee there was a lot of bipartisan agreement on intelligence matters. For example, the [Foreign Intelligence Surveillance Act of 1978] was passed almost unanimously.

So the ’70s are a turning point, but not toward politicization.

Yes. A turn toward bringing the secret side of government into the actual government, and the framework that Madison and the Founders back in 1787 created.

Speaking of the Founders, one clear thread in your book is the tension between intelligence agencies and democratic ideals. Is that tension inevitable?

I don’t think it’s inevitable. I think it boils down really to two models of governance in a democratic society, or two ways of approaching how we’re going to govern ourselves. One, one could call the Cheney approach or the Hamiltonian approach. The idea is that you need a strong, fast-moving, secretive executive branch in order for the United States to survive and perform well in a very hostile world. I think that flies in the face of the founding principles of this nation, which I would sum up by calling them the Madisonian principles. Madison’s idea, embraced by the other Founders by and large, was that power was a very dangerous thing. We’d learned that from George III.

A lot of it depends on what you think is true here. Do you think that intelligence agencies can be effective in a hostile world and still obey the dictates of a Madisonian system? As you can tell from my book, I’m firmly on the Madisonian side, and I think most American people are too, if they think about it.

Does technology change that calculation in any way?

Only in the sense that it makes accountability more difficult because members of Congress, and to some degree their staff, are by and large not technically oriented. So Congress, in order to keep pace with the technology that the NSA and other places are thinking about, is going to have to bring in more technical people. It just requires a different kind of vigilance.

Is there anything about the evolution of this subject that you think the average person would be surprised to learn?

I think one thing that’s worth pointing out is that the executive branch all too often is not faithful to the new rules about oversight. For instance, we have something called the “Gang of Eight rule,” and when there’s a covert action, which is an effort by the CIA under White House orders to manipulate events abroad — it sounds like the Russians in our country, but we do that too of course — in times of emergency, you don’t have the report immediately to the Senate and House intelligence committee. What’s happened is the executive branch, and this would apply to Democrats and Republicans alike, has ignored the provision that follows, which is that after two days you have to report to the full committees.

Then, on the legislative side the problem is distraction. When members of Congress are spending four to six hours a day making phone calls to raise money for the next election, they’re not doing a lot of oversight work.

You spoke to several people who have been Director of Central Intelligence about this topic. Did you learn anything from them that surprised you?

One thing that was surprising, and a little disheartening in a way, is that there’s a wide continuum of attitude by the nation’s spymasters, our top leaders in the intelligence community, about this Madisonian model I’ve suggested to you.

If you could go back in time and make people do something differently, is there anything about the evolution of intelligence accountability that you’d change?

I’d go back — do you think this is far enough? — to 1787, and I’d remind the Founders that they did a fabulous job I constructing American government. It was a novel experiment and rather bold given that every other country in the world was a dictatorship or a monarchy at the time, so high marks for them. But I would have reminded them not to make an exception of intelligence. I wish the Founders and those who followed them would have realized that the hazards of putting intelligence as an exception to the Madisonian rules would lead to Operation Chaos and COINTELPRO and the assassination plots and other examples of lack of supervision, and to the great trouble that got this country. 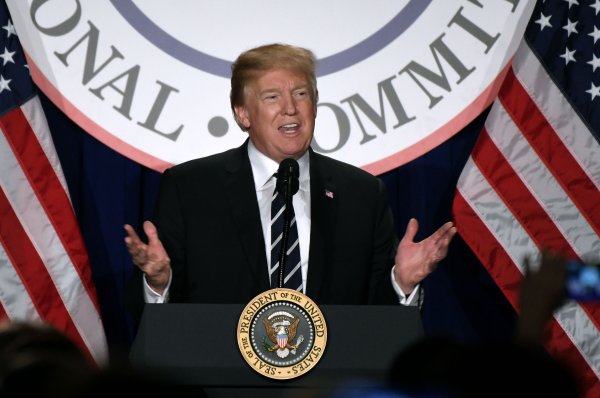 Trump Lashes Out at His Own FBI and Justice Department
Next Up: Editor's Pick