The Nunes Memo Doesn't Matter. Here's What Does

House Republicans released a controversial memo critical of the FBI’s investigation into possible meddling in the 2016 election – following approval on Friday from President Donald Trump.

Overseen by Republican Rep. Devin Nunes, chair of the House Intelligence Committee, the four-page memo argues that the FBI relied too heavily on claims from an unsubstantiated dossier written by former British spy Christopher Steele when getting a Foreign Intelligence Surveillance Act warrant on Trump advisor Carter Page.

As a political document, the GOP memo will help serve as a useful talking point in debate over the various Russia probes in the coming days and weeks, but that’s it. For various reasons, it’s unlikely to change many minds, existing instead in a sort of quantum state, neither proving nor disproving much of anything.

For one thing, it’s based on underlying documents and facts that remain classified, so most readers are going to have to take Nunes’ word for it – and he is hardly the type of person most independents and Democrats are inclined to trust. A former member of the Trump transition team, he has long argued that “there’s nothing there” in the Russia investigation, was forced to temporarily step aside over his handling of classified information and was once compared by a Republican senator to the bumbling Inspector Clouseau.

Meantime, the memo has been criticized as incomplete and misleading by the Justice Department, the FBI, Trump-appointed FBI head Christopher Wray and three Republican senators, not to mention most congressional Democrats, who voted on party lines to reject it and have prepared their own counter-memo. That all-but ensures the GOP memo will be read as a partisan work by most people who read up on it.

To be sure, the memo could still spark a much-needed debate over how the intelligence community spies on Americans suspected of being foreign agents. Signed into law in 1978, the Foreign Intelligence Surveillance Act allows investigators to wiretap email accounts and phone numbers of Americans with the permission of a judge in a secretive process, but the government’s own statistics show judges rarely deny applications.

But while these arguments are taking place in the realm of politics, there’s another process moving forward in the judicial realm. There, special counsel Robert Mueller has secured guilty pleas from former National Security Advisor Michael Flynn and foreign policy adviser George Papadopoulos and indictments against campaign chairman Paul Manafort and longtime associate Rick Gates.

Even as debate over the Nunes memo raged on Thursday, three attorneys working for Gates filed a motion to withdraw from representing him, fueling speculation among court watchers that Gates could accept a plea deal with Mueller.

Meantime, the New York Times reported that Mueller is zeroing in on the Trump Administration’s response to a report about a meeting at Trump Tower, with former spokesman Mark Corallo reportedly prepared to testify about his concerns that White House communications director Hope Hicks could have contemplated obstruction of justice.

Looming over all of this are the ongoing discussions about when and how Trump himself may sit down with Mueller, a scenario lined with legal pitfalls that have tripped up past presidents.

The Nunes memo is a bit of political theater, a set of arguments laid out in a document that can be debated endlessly without resolution. A deposition, an indictment and a plea agreement are also documents, but they are ones with very real consequences.

With the GOP memo, President Trump and House Republicans have muddied the debate over the Russia investigation for a few more days. But while the court of public opinion is important, the real action right now is taking place inside actual courtrooms, and no political arguments are going to change that. 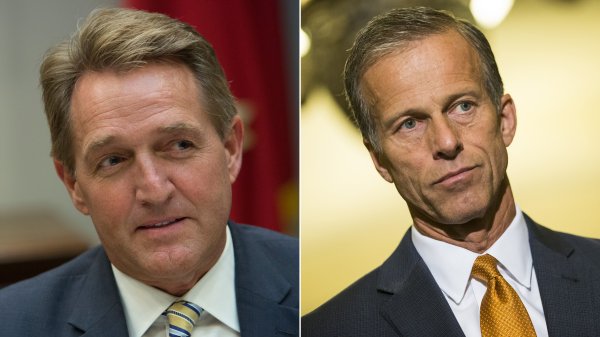 These Are the Republicans Speaking Out Against Trump's Release of the Nunes Memo
Next Up: Editor's Pick