Rihanna is leveraging her Twitter power to urge world leaders to financially commit to educating children in the world’s poorest countries while she takes part in an international conference in Senegal.

In her role as ambassador for the Global Partnership for Education, Rihanna is joining conference co-hosts Senegalese President Macky Sall and French President Emmanuel Macron in Dakar on Friday, Agence France-Presse reports.

At the financing conference, Global Partnership is aiming to secure $3.1 billion to support education for 870 million children in the most vulnerable parts of the world. The Barbadian pop star has already gotten to work using social media to drum up attention and funds for better schooling.

Rihanna, among the ten most followed people on Twitter, used her audience of 86 million Thursday to press U.K. Prime Minister Theresa May, Australia’s Malcolm Turnbull and French leader Macron to demonstrate their backing of girls’ education through funding Global Partnership. Rihanna called for the U.K. to pledge £380 million ($542 million), Australia to contribute AUD$200 million ($160 million) and France to pitch in €250 million ($312 million) by Friday.

Outside of the conference rooms, Rihanna has found herself at the center of a hostile conspiracy theory in Senegal. An association of 30 Islamic groups called on the government to rescind her invitation, and accused the celebrity of colluding with the Freemasons to promote homosexuality, the Guardian reports.

Radical religious objections aside, Rihanna is set to arrive in the West African nation’s capital on Friday. 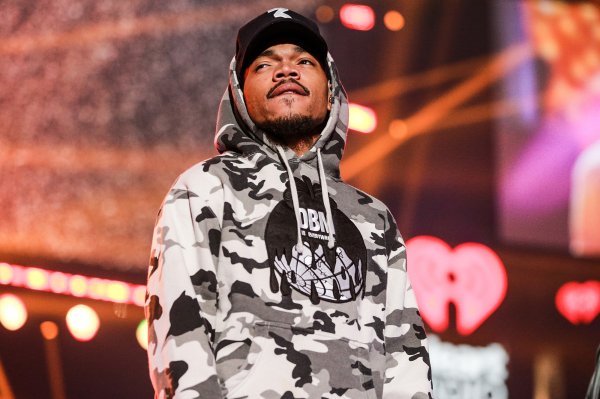 Chance the Rapper Declares that Ellen's Birthday Is a Holiday for the Rest of Us
Next Up: Editor's Pick