Donald Trump Just Bragged About the Time Melania Starred in an Aflac Ad. Here It Is

When President Donald Trump met with Aflac employees in the Oval Office to discuss tax cuts, he noted that First Lady Melania Trump once starred in a TV ad for their company.

“Your chairman I know very well and he’s done a fantastic job,” he said, according to the Columbus (Ga.) Ledger-Enquirer. “He actually a long time ago hired my wife to do a big commercial, an Aflac commercial, and think it was a successful commercial, too.”

Because the internet never forgets anything, a copy of the campy 2005 Aflac commercial starring the future First Lady and a talking duck can still be seen on YouTube.

Titled “The Experiment,” the ad opens on a mad scientist and his assistant scheming to swap the voice of a “lovely woman” (Trump, shown lying on the slab in a high-collared lace gown) for the company’s trademark duck, in order to sell the world on insurance with more “sex appeal.”

Trump has no lines in the ad except the end, when she opens her mouth and quacks like the Aflac duck before staring at her newly webbed feet in horror.

Melania is not the only Trump to star in TV ads, however. Over the years, Donald Trump has starred in ads for everything from stuffed crust pizza (alongside former wife Ivana Trump) to McDonald’s (alongside Grimace) to his own Trump board game (alongside SNL star Phil Hartman). 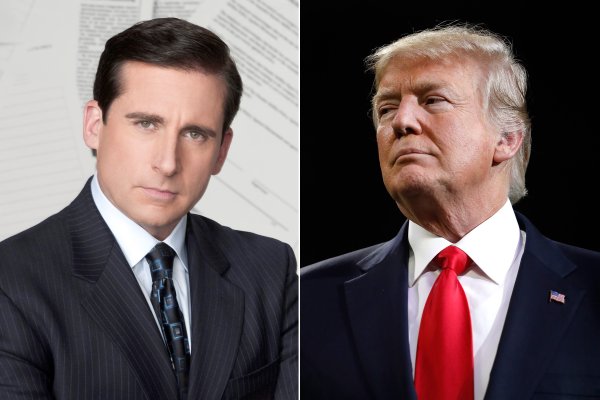 You Can Never Unsee Trump's Face on Michael Scott in This Iconic Scene From The Office
Next Up: Editor's Pick