Rep. Joe Kennedy gave a buzzy response to the State of the Union, but “Melania Trump” stopped by The Late Show on Wednesday night to give her own take on President Trump’s speech. Turns out that Laura Benanti’s “Melania” was glued to her seat during the president’s address. Unfortunately, she meant it literally, noting: “That General Kelly is a real prankster, right?!”

Stephen Colbert noted that the first lady opted to arrive at the SOTU address without her husband. “So the state of our union is strong,” Colbert joked. “The state of their union? It’s complicated.” Benanti’s Melania admitted to Colbert that lately her “life is an ocean of loneliness.” When Colbert asked her to clarify, she said, “I was just promoting my new fragrance: Ocean of Loneliness. It is a decadent bouquet of gardenia blossoms with a hint of ‘I live in a prison of my own making!’”

Colbert also asked her about her decision to wear an all-white pantsuit to the State of the Union speech, which some noted was similar to an ensemble previously worn by Hillary Clinton. “Oh snap,” Colbert said. “Dressing like Hillary? The only thing worse would be to show up dressed as Obama’s birth certificate.”

Colbert also wanted to know if “Melania” wore white to support women’s rights and suffrage. “Yes. Every day I’m suffraging,” she replied. When Colbert explained that “suffrage” means voting, “Melania” made it clear that can’t wait to vote in 2020. “For your husband?” Colbert asked. “Oh, of course!” she replied, before adding the excuse she gave for not accompanying the president to the World Economic Forum in Davos, Switzerland: “Unless I have ‘scheduling and logistical issues.’” 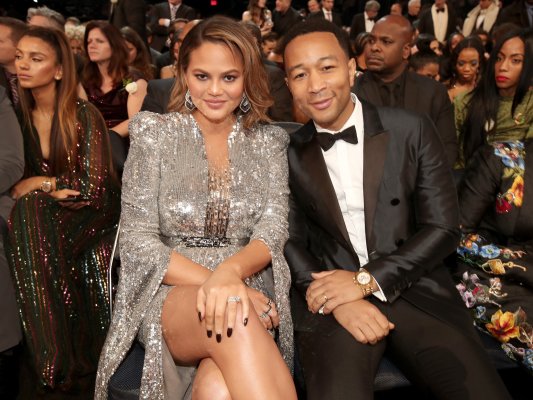 Chrissy Teigen Has the Most Universally Relatable Story About Meeting Beyoncé at the Grammys
Next Up: Editor's Pick