Who Is Carter Page? Meet the Donald Trump Advisor at the Center of the GOP Memo

President Trump could decide as soon as Friday to release a controversial GOP memo on FBI surveillance.

In a rare public move, the FBI said in a statement that it has “grave concerns” over the memo, while Democrats on the House Intelligence Committee voted against its release and prepared a counter-memo.

At the center of the controversy is Page, a colorful foreign policy expert with business ties to Russia who advised Trump’s campaign.

Here’s what to know about Page, his involvement with the Trump campaign, and why he may have been the focus of an FBI investigation.

What are the key events in the Carter Page controversy?

January 2013: At an energy conference in New York, Page meets with Victor Podobnyy, according to court documents. The two exchange contact information and have several more meetings discussing energy policy, where they also exchange documents on that subject.

Jan. 26, 2015: Pobodnyy and two other Russians are charged with working as agents for Russian intelligence in New York. Court records include a transcript of a recorded conversation in which Pobodnyy talks about trying to recruit someone identified as Male-1, which BuzzFeed later reveals to be Page. “I think he is an idiot,” Pobodnyy says in the transcript.

December 2015: Feeling that the Trump campaign aligns with his ideas on Russia, Page asks Ed Cox, chair of the New York state Republican Party, to recommend him as an advisor. He is brought on right away. “Anyone who came to us with a pulse, a résumé and seemed legit would be welcomed,” a campaign official tells the Post later.

March 21, 2016: Trump meets with the editorial board of the Washington Post. Asked about his foreign policy team, he names, among others, Page and George Papadopoulos, who later pleads guilty to lying to the FBI about contacts he had with the Russian government during the 2016 presidential campaign.

• Page joins a group dinner of Trump campaign national security advisors, including then-Sen. Jeff Sessions, at the Capitol Hill Club in Washington. He later testifies that he casually told Sessions about an upcoming trip to Russia during the dinner.

• Page spends three days in Moscow, where he gives a talk at the New Economic School that is critical of American policy toward Russia and favorable toward Russian President Vladimir Putin. The speech interests FBI investigators, who have kept an intermittent eye on Page since the Pobodnyy case, reportedly prompting their first looks at the Trump campaign’s ties to Russia.

• Former British intelligence agent Christopher Steele approaches an FBI agent with information he has uncovered about Trump’s relationship with Russia while doing opposition research on behalf of the Democratic National Committee and the Hillary Clinton campaign.

Sept. 23, 2016: In an article published in Politico magazine on Sept. 23, Trump spokeswoman Hope Hicks is quoted by a reporter working on a profile of Page saying that “he has no formal role in the campaign.”

October 2016: The FBI and the Justice Department obtain a FISA warrant to monitor Page’s communications after convincing a Foreign Intelligence Surveillance Court judge that there is probable cause to believe Page is acting as an agent of a foreign power, namely Russia. It is renewed three times, as required by statute every 90 days.

December 2016: Trump attorney Don McGahn writes Page to “immediately cease” saying he is a Trump advisor. “You were merely one of the many people named to a foreign policy advisory committee in March of 2016 — a committee that met one time,” McGahn writes. “You never met Mr. Trump, nor did you ever ‘advise’ Mr. Trump about anything. You are thus not an ‘advisor’ to Mr. Trump in any sense of the word.”

• In sworn testimony at his confirmation hearing, Attorney General nominee Jeff Sessions testifies that he is “not aware of any” communication between the Trump campaign and the Russian government during the campaign.

• BuzzFeed News publishes the full unsubstantiated dossier detailing President Trump’s alleged ties to Russia and claiming the Russian government may be blackmailing him. The dossier alleges that former campaign manager Paul Manafort used Page as an intermediary with the Russian government and that Page attended a secret meeting at the Kremlin in July of 2016.

Feb. 12, 2017: In an eight-page letter to the Justice Department’s civil rights division, Page calls the Russia investigations “frivolous” and says they are “among the most extreme examples of human rights violations during any election in U.S. history since Dr. Maritn Luther King Jr. was similarly targeted for his anti-war views.”

March 2, 2017: Amid concerns about his January testimony and newly revealed meetings with the Russian ambassador, Sessions announces he will recuse himself from any investigations related to the Trump campaign.

April 11, 2017: The Washington Post first reports on the existence of the FISA warrant on Page from the summer of 2016. In an interview, Page again compares the surveillance to the FBI’s eavesdropping on King. “This confirms all of my suspicions about unjustified, politically motivated government surveillance,” he says.

May 7, 2017: In an angry nine-page letter to the Senate intelligence committee, Carter says he had only “brief interactions” with Pobodnyy in 2013 and calls requests for more information a “show trial” based on “the corrupt lies of the Clinton/Obama regime.”

Oct. 18, 2017: During five hours of testimony before the Senate Judiciary Committee, Sessions is grilled about his contacts with Russians during the campaign. When asked if any surrogates from the Trump campaign had contact with the Russians, he responds: “I did not — and I’m not aware of anyone else that did. I don’t believe that it happened.”

Oct. 30, 2017: In wide-ranging interview MSNBC’s Chris Hayes, Page discusses Papadaopoulos’ guilty plea, admitting that he was on campaign email chains with Papadopoulos about Russia. “I genuinely hope, Carter, that you are innocent of everything, because you are doing a lot of talking,” Hayes says.

Nov. 2, 2017: During six hours of closed-door testimony with the House intelligence committee, Page testifies that he told Sessions about his trip to Russia ahead of time. During the testimony, Page invokes the Fifth Amendment when asked to produce documents that could potentially be relevant to the investigation.

Nov. 3, 2017: In an interview with CNN’s Jake Tapper, Page says that the fact he told Sessions about his upcoming trip to Russia was a “nothing event” made “totally in passing.” He adds that Sessions was not the only one on the campaign that he told before he took the trip. “I mentioned it to a few other people,” he says.

Jan. 29, 2018: The House Intelligence Committee votes along party lines to publicly release a classified memo overseen by Republican Rep. Devin Nunes which criticizes the FBI’s handling of a FISA warrant on Page, alleging that relied too heavily on information in the Steele dossier. In a rare public statement, the FBI says it has “grave concerns” about the memo. 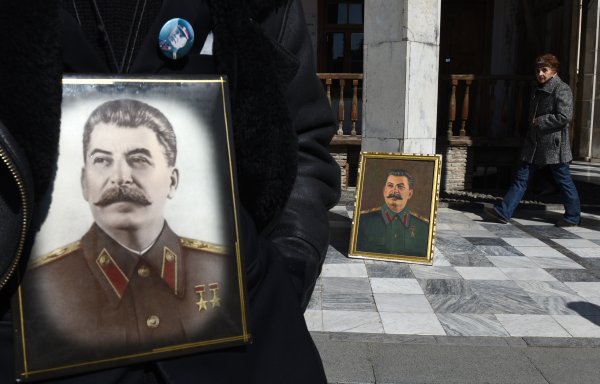 Russia Has Banned the British Comedy 'Death of Stalin'
Next Up: Editor's Pick