Everything the President’s Address Didn’t Say About Women

Watching last night’s State of the Union address it would be easy to think that the state of women in the United States is weak. Looking at President Donald Trump flanked by white men on each side and at his cabinet seated in the first row, hearing little acknowledgement of women’s rights and power, it would be easy to forget that there is a movement building its momentum all across the U.S. right now that will bring with it drastic change: women are fighting back.

What started last year with revelations about systemic abuse in Hollywood has steadily built into a growing movement of #MeToo and #TimesUp with women from all walks of life coming forward to share their experiences of being sexually harassed and assaulted by men in positions of power. This type of behavior has touched almost every woman and has been business-as-usual forever. I remember being a junior staffer on the Senate Agriculture Committee more than 20 years ago and having a senior executive at a major organization, 30 years my senior, constantly ask me on dates as I tried to work with him on welfare reform legislation. But now, times are changing.

A few weeks ago, Democratic Minnesota Lieutenant Gov. Tina Smith was sworn in as a U.S. Senator to replace former Democratic Sen. Al Franken, who had been accused of sexual misconduct by multiple women. And that’s just one of a growing number of resignations from men across every facet of life. Men who dare to commit these acts are on notice. Women are coming for you, from the Capitol to the boardroom.

On Monday, an article proclaimed that more than 500 women are running for office in 2018. What the headline should’ve read is more than 500 women are running for Congress or governor this year. In reality, there are thousands of women running all across the country and at every level of government. This year, about 82% of the 7,383 state legislature seats in this country are up for re-election. While we won’t know the final numbers for many states until after candidate filing deadlines, there are some signs of what’s in store. Yesterday was the deadline to file to run for office in Kentucky, which ranks 42nd in the nation for women’s representation. Tuesday morning, Kentucky’s Secretary of State wrote on Twitter that 77 women had filed to run for their general assembly. That’s one state out of 46 that are holding state legislature elections in 2018 and not even counting the tens of thousands of local offices up for election this year. My Democratic organization Emerge America alone has more than 300 alumnae on the ballot. If this is a harbinger of what’s to come, we shouldn’t expect a “pink wave.” It’s going to be a tsunami.

However, the indicators that this is a historic time for women aren’t just starting to pop up this year — we have momentum behind us. In 2017, we saw women in Virginia run for the state’s House of Delegates in historic numbers. Of those women, 11 won their races, including the first Latinas, the first Asian American women and the first openly lesbian candidate ever elected to the Virginia House, as well as the first openly transgender woman to ever be elected and seated to any state legislature. Fittingly, the latter beat a long-time male incumbent who fondly referred to himself as Virginia’s “chief homophobe.” Virginia Del. Elizabeth Guzman, a Democrat and one of the new delegates, gave the Democratic response to the State of the Union in Spanish last night. She is a shining example of why we need to welcome immigrants to the U.S. — Guzman emigrated here from Peru as a single mom, worked three jobs in order to put herself through college, and now serves the state of Virginia as a legislator and her community of Dale City as a social worker.

It comes as no surprise to anyone that the first year of the presidency of a man who has been accused of sexual harassment and assault by more than a dozen women barely addressed the rights of women (he has denied the allegations). Sure, Trump briefly paid lip service to paid family leave last night in his remarks, but we’ve seen what he does with his power. Trump would like to “reform” our health care system by rolling back Medicaid, which would disproportionately affect women of color, and by eliminating essential health benefits, which would allow insurers to once again sell barebones plans that no longer cover things like maternity care. His administration has canceled workplace protections for women concerning sexual harassment, made it harder to close the gender pay gap and reversed campus sexual assault guidelines. We’re only a few weeks into 2018, and already this year Trump has rolled back protections that made it harder for states to defund Planned Parenthood, which provides health care to millions of American women.

But Trump and his allies’ actions have not gone unnoticed by women across America. Quite the contrary. Millions of women across the country have taken note of every one of these actions. We’re angry. And we’re determined.

If Trump winning the presidency was the straw that broke the camel’s back for American women — who showed up by the millions the day after his inauguration to protest — then Trump’s first year in office has cemented our resolve to change things. We are committed, not just to pushing back against Trump, but also to changing the entire system. The state of the union may be division — but the state of women in the U.S. is unstoppable.

Andrea Dew Steele is the President and Founder of Emerge America. 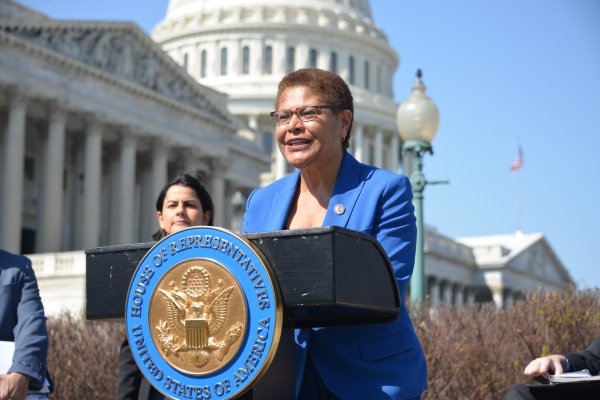