President Donald Trump issued an executive order Tuesday to keep open the detention facility at Guantanamo Bay, in Cuba, rolling back his predecessor’s order to close the prison for suspected terrorists.

Trump made the public push about the detention camp, which was built after the Al Qaeda attacks of Sept. 11, 2001, during his first State of the Union in front of Congress.

“Terrorists are not merely criminals,” he said. “They are unlawful enemy combatants. And when captured overseas, they should be treated like the terrorists they are.”

Republicans gave the president a rousing round of applause when he brought up Guantanamo, making the controversial facility a political flashpoint once again.

There are now 41 detainees remain at Guantanamo, but just a handful were tried and convicted of war crimes. Purported Sept. 11 mastermind Khalid Shaikh, for instance, is going through the tribunal process.

Obama first sought to close the facility by executive order in his second full day as president in 2009, saying it was expensive, unnecessary, and served as a rallying cry for militant groups abroad. Nearly 700 were released or transferred to custody of other nations. Some released detainees were found to have later joined militant groups and aided terror attacks in Afghanistan and elsewhere.

“In the past, we have foolishly released hundreds of dangerous terrorists, only to meet them again on the battlefield — including the ISIS leader, al-Baghdadi,” Trump said.

Trump directed Defense Secretary James Mattis to reexamine the military detention policy at Guantanamo and issue a report within 90 days. Other than that assessment, though, the executive order does not disrupt current operations at the facility. It states that nothing prevents Mattis from “transferring any individual away” from the Guantanamo “when appropriate,” even to a “competent tribunal of the United States.”

During the 2016 presidential campaign, Trump promised to keep Guantanamo open and “load it up with some bad dudes.” He said in November he’d consider transferring Sayfullo Saipov, the 29-year-old Uzbek immigrant accused of carrying out the New York City truck terrorist attack, to Guantanamo.

The executive order makes clear it will not “affect existing law or authorities relating to the detention of United States citizens, lawful permanent residents of the United States, or any persons who are captured or arrested in the United States.” 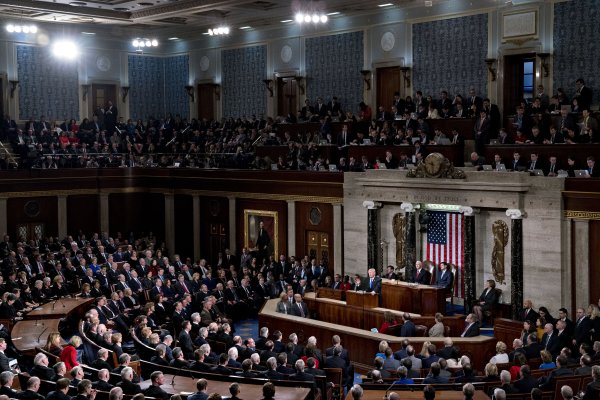 'Tonight We Got Teleprompter Trump.' Democrats Seethe After State of the Union
Next Up: Editor's Pick