Trump Was Calmer About North Korea This Time. That's a Sign He's Taking it Seriously

President Donald Trump’s remarks on North Korea in his State of the Union speech Tuesday night might have seemed uncharacteristically restrained.

Trump didn’t call North Korean leader Kim Jong Un “Rocket Man” or threaten to “totally destroy North Korea,” as he did when he addressed the United Nations in September.

But in some ways his milder language suggested the gravity of a threat. North Korea is just a “handful of months” away from being able to launch a nuclear attack on the mainland U.S., according to CIA Director Mike Pompeo.

“Trump’s State of the Union sought to build the moral case for a U.S. preventive war to ‘liberate’ North Koreans,” says Christine Ahn, founder of Women Cross DMZ, a group that mobilizes women for Korean peace. The speech, she says, was “highly reminiscent of George W. Bush’s ‘Axis of Evil’ speech” in 2002 before the U.S. went to war with Iraq.

“North Korea’s reckless pursuit of nuclear missiles could very soon threaten our homeland,” Trump said. “We are waging a campaign of maximum pressure to prevent that from happening.”

Trump also said the U.S. must “modernize and rebuild our nuclear arsenal” to “deter any acts of aggression.”

“Perhaps someday in the future there will be a magical moment when the countries of the world will get together to eliminate their nuclear weapons,” Trump said. “Unfortunately, we are not there yet.”

Trump’s focus on North Korea marked a change from his first address to a Joint Session of Congress last year, when he did not mention North Korea or nuclear weapons. “We want harmony and stability, not war and conflict,” the President said then. “We want peace, wherever peace can be found.”

On Tuesday night, Trump sought to build support for his approach by drawing attention to two men who suffered at the hands of the North Korean regime.

Trump first spoke of Otto Warmbier, the Ohio college student who died last summer after he was detained for alleged anti-state acts during a visit to North Korea. North Korea released Warmbier in a coma. His parents described his treatment by the North Korean regime as torture. “Tonight, we pledge to honor Otto’s memory with total American resolve,” Trump said. Warmbier’s parents and siblings were in attendance near the First Lady.

Trump also told the story of Ji Seong-ho, a North Korean defector who was tortured by state authorities and later escaped. “His tormentors wanted to know if he had met any Christians,” Trump said. “He had.” Ji too was in the balcony.

“The moment with the North Korean defector was very powerful,” says Michael Green, senior vice president of the Center for Strategic and International Studies. “It was also a very different tone from the one set when Trump said as a candidate he would have a hamburger with Kim Jong-un to work things out.”

Trump also did not reference the so-called “bloody nose” option of using military force to push North Korea to abandon its nuclear weapons and ballistic missiles program. Such a strike, experts believe, would almost certainly endanger hundreds of thousands of people and possibly lead to a nuclear conflict. Trump’s decision not to raise the option during the speech “will reassure nervous allies,” Green says.

As Trump did in his speech in South Korea in November, Trump connected Kim’s atrocities at home to his aggression abroad, says American Enterprise Institute’s Dan Blumenthal, director of Asian Studies. “The challenge is to up the ‘maximum pressure’ campaign, and keep South Korea on board, even as time is running out before Kim can put a nuclear weapon on an ICBM,” Blumenthal says. 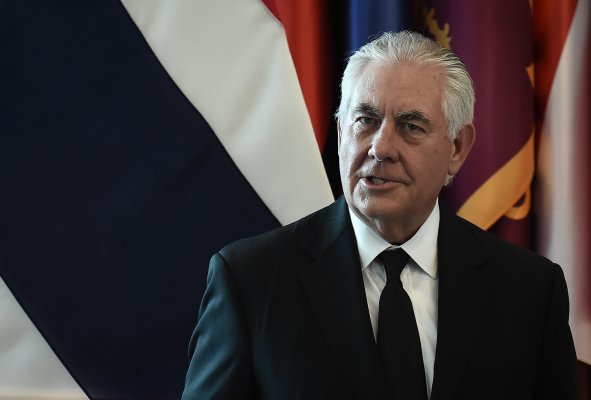