Trump Mentioned the Pledge of Allegiance Pose in His State of the Union. Here's the Real Reason for the Hand-on-Heart Gesture

During his first State of the Union address, President Donald Trump on Tuesday night highlighted the work of 12-year-old Preston Sharp of Redding, Calif., who started an effort to place American flags at veterans’ graves on Veterans Day. Sharp’s patriotism, Trump said, is a reminder of “why we salute our flag, why we put our hands on our hearts for the Pledge of Allegiance and why we proudly stand for the national anthem.”

Though a feeling of patriotism may well inspire today’s Americans as they put their hands on their hearts for the pledge, there used to be a different way to properly address the flag — and there’s a specific reason why it changed to the hand-over-heart gesture.

The Pledge of Allegiance was written amidst a flag-planting movement, too: one to put a flag in every American school classroom in the 1880s and 1890s. The young patriot named in the State of the Union even coincidentally shares a name with the man who started the movement in the late 19th century, Daniel Sharp Ford, the publisher of The Youth’s Companion magazine.

The magazine is thought to have sold flags to about 26,000 schools by 1892. Motivated not only by patriotism but also by a desire to sell subscriptions, the magazine came up with the idea for a salute to the flag, something that would promote national loyalty but also encourage the purchase of both flags and magazines. That salute would form the basis of the Pledge of Allegiance. There’s long been a debate about who exactly wrote it, but its author is believed to be Francis Bellamy, 37-year-old Baptist minister and vice president of Boston’s Society of Christian Socialists. According to Mark G. Toulouse’s God in Public: Four Ways American Christianity and Public Life Relate, one of the magazine’s marketing staffers, James B. Uptham, was a nephew of President Benjamin Harrison, and the group was able to get National Education Association support for their campaign.

The timing was ripe for an idea like theirs. Not only was Harrison’s administration looking for ways to celebrate the 400th anniversary of Christopher Columbus landing in America, but the nation was in the grips of a wave of turmoil about patriotism and the meaning of the United States, particularly the question of who got to be American. That debate would fuel extreme policies in Washington and elsewhere, and it also played out in classrooms. “These anxieties about immigration and the perceived need to imbue immigrants with loyalty to the United States fueled the early-20th-century drive to require flags and pledges in the public schools; repeatedly pledging allegiance would somehow ‘Americanize’ the young and inoculate them against the disease of radicalism,” writes historian Alexander Keyssar.

The version of this Pledge of the Allegiance published in the Sep. 8, 1892, issue of the magazine was “I pledge allegiance to my flag and the Republic for which it stands, one nation, indivisible, with liberty and justice for all.”

And here’s how Bellamy described how pupils should deliver it in the “official programme” of the National Columbian Public School Celebration, which took place on Oct. 21, 1892:

This proper delivery is, notably, not with a hand over the heart.

The reason for the change, and why today’s posture is seen as the proper way to deliver the pledge, is simple if surprising: By the 50th anniversary of the Pledge, this so-called “Bellamy salute” had gotten a bad rap because it looked a lot like the salute that Nazis were using.

Just six months after Congress added the Pledge to the federal flag code, it would change the salute to the right-hand-over-heart posture. 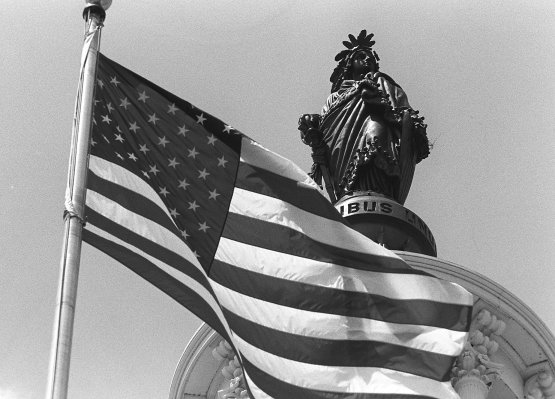 The Surprisingly Complicated Symbolism of the Freedom Statue Mentioned in Trump's State of the Union
Next Up: Editor's Pick