You Asked: Is It Bad for You to Read the News Constantly?

A recent survey from the American Psychological Association found that, for many Americans, “news consumption has a downside.”

More than half of Americans say the news causes them stress, and many report feeling anxiety, fatigue or sleep loss as a result, the survey shows. Yet one in 10 adults checks the news every hour, and fully 20% of Americans report “constantly” monitoring their social media feeds—which often exposes them to the latest news headlines, whether they like it or not.

Of course, many people feel it’s important to stay informed. And it’s understandable that news you find concerning could produce stress and anxiety. But recent changes to the way everyone gets their news—coupled with the style of news that dominates today—may not be good for mental and even physical health.

“The way that news is presented and the way that we access news has changed significantly over the last 15 to 20 years,” says Graham Davey, a professor emeritus of psychology at Sussex University in the UK and editor-in-chief of the Journal of Experimental Psychopathology. “These changes have often been detrimental to general mental health.”

Davey says today’s news is “increasingly visual and shocking,” and points to the inclusion of smartphone videos and audio clips as examples. These bystander-captured media can be so intense that they can cause symptoms of acute stress—like problems sleeping, mood swings or aggressive behavior—or even PTSD, he says.

Some of Davey’s research has shown that negative TV news is a significant mood-changer, and the moods it tends to produce are sadness and anxiety. “Our studies also showed that this change in mood exacerbates the viewer’s own personal worries, even when those worries are not directly relevant to the news stories being broadcast,” he says.

While increased anxiety and stress are reason enough to be wary of overdoing it when it comes to the news, these and other mental health afflictions can also fuel physical ailments. Stress-related hormones, namely cortisol, have been linked to inflammation associated with rheumatoid arthritis, cardiovascular disease and other serious health concerns.

So if the evidence suggests the news can stress people out, why do they keep going back for more? For one thing, it’s entertaining, Davey says. The human brain is also wired to pay attention to information that scares or unsettles us—a concept known as “negativity bias“.

“In a state of nature, our survival depends on finding rewards and avoiding harm, but avoiding harm takes priority,” says Loretta Breuning, a former professor of management at California State University, East Bay and author of Habits of a Happy Brain.

Breuning explains that the human brain is attracted to troubling information because it’s programmed to detect threats, not to overlook them. “This can make it hard for us to ignore the negatives and seek out the positives around us,” she says. “Our brain is predisposed to go negative, and the news we consume reflects this.”

While your brain may find the latest news enthralling, it’s hard to argue that all of that news is truly illuminating. Breuning says much of the opinion and commentary that passes for news analysis is the equivalent of lunchroom gossip. “There’s this idea of following the news in order to be an informed citizen, but a lot of what you see today is gossip elevated to a sophisticated level,” she says. And if the news you consume is getting you worked up or worried—and some would say this is exactly the goal of much of today’s coverage—it’s probably not doing your health any favors, she says.

But other experts say the effect news has on a person’s health varies from one individual to another.

“News is not an infectious and contagious pathogen like anthrax or the Ebola virus that impacts humans in relatively predicable ways,” says Chris Peters, an associate professor of media and communication at Aalborg University Copenhagen. “It’s extremely complicated—if not impossible—to predict how people in the aggregate will respond to news.”

He says we shouldn’t focus on the amount of news we consume each day, but rather on the ways in which we engage with news in relation to our everyday lives and the people who fill them. If you find your news habit is messing with your relationship or well-being, some changes to the ways you interact with the news may be helpful.

“Try to be aware of how [the news] changes your mood or makes your thoughts more negative,” Davey advises. If you notice a news-induced surge of pessimism, taking a breather with mood-lifting activities like listening to music, exercising or watching something that makes you laugh may all help counteract those dark vibes.

You could also pare back your news habit. “Most of us these days have news alerts set on our smartphones, and 24-hour news on continuously in the background,” he says. “That’s probably far too much.”

Breuning agrees, and recommends limiting your news consumption to one block of time each day—say, at lunch or before dinner—if not less. At the very least, don’t watch or read the news before bed, she says.

Staying aware and informed is a good thing. But when it comes to your health, too much news can spell trouble.

The original version of this story misstated the name of the institution where Loretta Breuning was once a professor. It is California State University, East Bay, not University of California, East Bay. 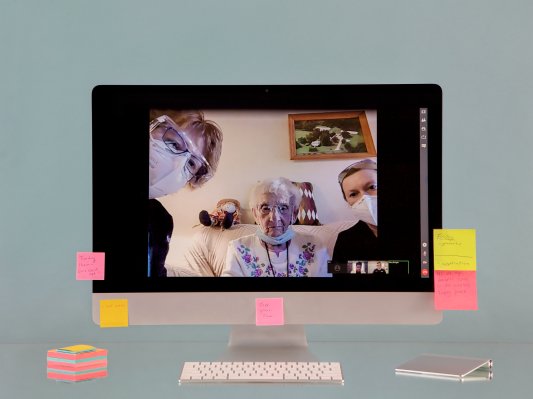 How U.S. Medical Schools Are Training a Post-Pandemic Generation of Doctors
Next Up: Editor's Pick