4 Crazy Groundhog Day Facts You Probably Never Knew — But Should

You probably know the gist of Groundhog Day: Each Feb. 2, America’s most famous groundhog, Punxsutawney Phil, emerges from his burrow, and looks for his shadow. If he sees it, the legend goes, six more weeks of winter lie ahead. And if he doesn’t see his shadow, there will be an early spring.

But where does the zany tradition of Groundhog Day come from — and why?

Before Punxsutawney Phil makes his 2019 prediction Saturday morning, here are four fun Groundhog Day facts you may not have known.

The roots of Groundhog Day can be traced back to a Christian holiday called Candlemas Day.

Each year, on the midpoint between the winter solstice and the spring equinox, members of the clergy would bless and distribute candles needed to get people through the remaining winter days. Tradition went that winter would drag on if Candlemas Day dawned sunny and clear, but spring would come soon if the weather was cloudy.

The Germans expanded on Candlemas Day by taking meteorology cues from a hedgehog, says William Deeley, president of the Punxsutawney Groundhog Club, which is responsible for the nation’s largest and most famous Groundhog Day celebration.

“We were all farmers, and we basically were depending on the animals to help us with the weather,” Deeley said. “We didn’t have weather satellites. We didn’t have barometers for this and barometers for that.” Instead, German folklore said that if the hedgehog cast a shadow on Candlemas Day, winter would continue for six more weeks.

When German immigrants began to settle in Pennsylvania in the 1880s, they adapted the custom to use the more common groundhog, Deeley explains. The tradition stuck, and continues to this day.

Groundhogs were not always treated as well as Punxsutawney Phil

These days, Punxsutawney Phil is treated like “royalty,” Deeley says. But when Groundhog Day first came to Pennsylvania, that likely wasn’t the case.

“It was a social party,” Deeley says. “They basically got together and instead of him being the honoree, he was the entrée.”

Yes, that means they “probably ate the groundhog,” Deeley clarified.

There has likely been more than one groundhog Phil

Many people wonder how many groundhogs have made Groundhog Day predictions over the years. To Deeley, the Punxsutawney Phil is an immortal character, just like “Mickey Mouse, Donald Duck or the Easter Bunny.”

“At our summer picnic, we give Phil a shot of this special punch or elixir, and for every gulp he gets, [the legend goes] he gets seven more years of longevity,” Deeley explains. “It’s a secret recipe.”

The formula is so closely guarded, in fact, that even Deeley doesn’t know the whole thing. Several Groundhog Club members and handlers contribute different parts of the brew, to ensure that the recipe never gets out in its entirety.

Deeley declined to share how many groundhog Phil’s there have been, but the average groundhog living in captivity can live up to 10 years, according to the University of Michigan’s Museum of Zoology. That means that if each Punxsutawney Phil lived a decade, there have been about 13 groundhogs.

Phil and his “wife,” Phyllis, live together, Deeley says. Unlike most groundhogs, which hibernate through the winter, Deeley says they’re kept in an environment with enough light and heat to keep them awake for Groundhog Day on Feb. 2, albeit a little “lethargic and sleepy.” 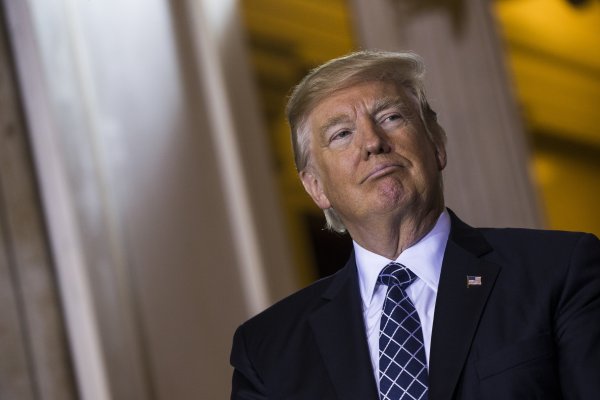 President Trump on Holocaust Remembrance Day: 'We Will Condemn Hatred'
Next Up: Editor's Pick