How the President Can Be Prosecuted as a Criminal

“The President, Vice President and civil officers of the United States shall be removed from Office on Impeachment for, and conviction of, Treason, Bribery, or other high Crimes and Misdemeanors.”

“Judgment in cases of Impeachment shall not extend further than to removal from Office … but the party convicted shall nevertheless be liable and subject to Indictment, Trial, Judgment and Punishment, according to law.”

These passages explain that, despite all the political rhetoric emanating from the White House, the Capitol building and elements of the media, if the House impeached and the Senate convicted Donald Trump, the only result of that Congressional action would be his removal from the Presidency.

But what is equally important is what they don’t say. There is no language in the Constitution providing the President with any immunity from prosecution by the appropriate criminal authorities: he is subject to the ordinary criminal processes of “Indictment, Trial, Judgment and Punishment, according to law.” Furthermore, there is not one syllable directly putting the President beyond the reach of the criminal law even if Congress does not impeach.

The argument that the President is immune from the criminal laws is just that — an argument. It involves two issues:

First is the question of whether an obstruction of justice charge can be brought in this case. The President’s supporters argue that key elements of any such indictment could not support a conviction. If everything the President did was legal, they say, he could not possibly be convicted of a crime. And indeed the President was legally entitled to ask then–FBI Director James Comey to go easy on former National Security Advisor Flynn, and then to fire Comey for that or any other reason — just as he is legally entitled to fire Special Counsel Robert Mueller, Deputy Attorney General Rosenstein or anybody else in the Department of Justice. But the law is clear: an otherwise legal act can be an obstruction of justice if undertaken for corrupt purposes. Yes, the President has the right to fire the head of the FBI. But there is no Constitutional support for the notion he can do so corruptly to immunize himself from “Indictment, Trial, Conviction, and Punishment” for money laundering (whether involving Russians or otherwise), obstruction of justice, a violation of the election laws or any other felony. An imperial Presidency was the worst fear of the Founders.

The second question is not whether, but when. Can the President avoid indictment while in office? But again, there is no language in the Constitution saying he enjoys any such protection. The Department of Justice itself has made this argument before with regards to Article I Officers. I saw it first-hand. During the then–Vice President Spiro Agnew bribery investigation, our legal team argued on behalf of the Vice President that because he was subject to impeachment under Article II, Section 4, he was immune from criminal prosecution unless and until he had been impeached by the House and convicted by the Senate. In effect, we argued that the Vice President had to be impeached and removed from office first — and then criminal charges could proceed. The Department vigorously rejected that claim. They insisted there was nothing in the Constitution that said impeachment was the exclusive remedy for crimes committed by Article I Officers: the Vice President and, by logical extension, the President could be subject to both impeachment and indictment, even if those proceedings were pursued simultaneously. Surprising no one, the Department was quick to nonetheless urge that President Nixon was immune yet Vice President Agnew was not. But that was based on derived argument — not on the hard Constitutional language that self-proclaimed “conservative” jurists insist is the only real guide to Constitutional interpretation. And the current president has certainly made clear that “conservative” judges are the only ones he will appoint.

A Nixon indictment for his evident criminal conduct in obstructing justice regarding the Watergate break-in and cover-up would certainly have produced an interesting legal battle. But the prosecutors dodged the question by naming him a co-conspirator and not a defendant. So the issue remains judicially undetermined.

Does the recent revelation that Trump went so far as to issue a directive to fire Mueller add weight to an obstruction count? Did the President add to the proof of obstruction by offering three absurd reasons for his decision? Does the President’s claim that he is absolutely immune from criminal process while in office offend the fundamental precepts of the Founders?

The answers to all three questions is “yes.”

If Special Counsel Mueller finds evidence to bring criminal charges against the sitting President, he should obtain a Grand Jury indictment and proceed. If the President wants to fight the legality of the indictment, he should do so in court — not by means of craven Congressmen publishing spurious claims about the integrity of Mueller and his team. That campaign is more than divisive. It smacks of political venality and is a threat to the architecture of our constitutional democracy. 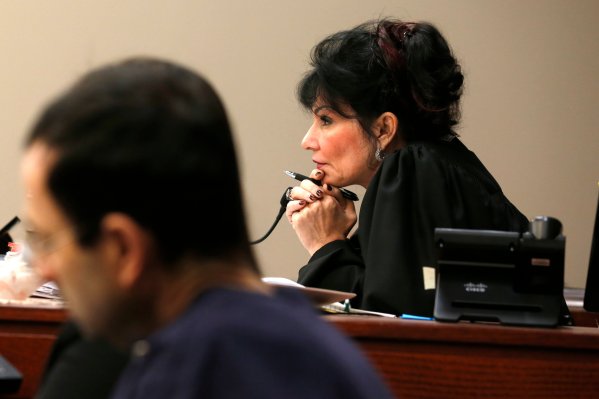 How the Judge in Larry Nassar's Case Undermined Justice
Next Up: Editor's Pick