The 60th annual Grammy Awards drew criticism online only one woman took home a major award, with viewers using the hashtag #GrammysSoMale to sound off on the matter.

However, it wasn’t just the lack of golden gramophones awarded to women that didn’t sit well with the Internet — many were also disgruntled by the fact that much of the night’s screen time was given to veteran male artists U2 and Sting, as opposed to female artists who were nominated that night like Lorde, the only female nominee for Album or the Year or Cardi B (Cardi performed that night during Bruno Mars’ “Finesse” but was not given a solo performance of her own.)

Social media users were quick to note that U2 appeared not once, not twice, but three times during the Grammys, featuring prominently in the excellent Kendrick Lamar opening act before performing one of their new songs during the ceremony and then closing out the show by presenting Bruno Mars with Album of the Year. Sting also clocked in several major appearances during the show, appearing first in a skit with host James Corden, then for a performance with Shaggy of a song off their upcoming album, and finally, to present Song of the Year.

The Internet wasn’t shy in sounding off about the major airtime that U2 and Sting got and took to their social media accounts to call out the Grammys. 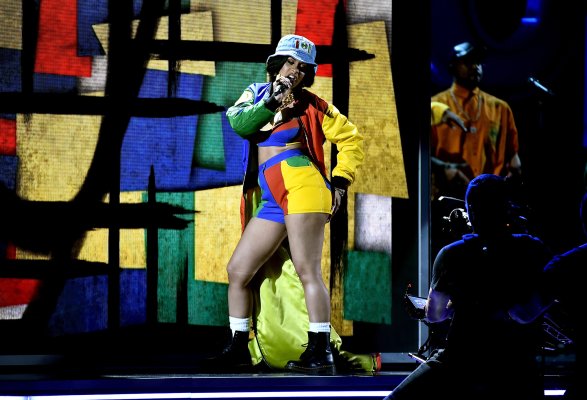 The Internet Delivered the Funniest Memes of Cardi B's Colorful Grammys Outfit
Next Up: Editor's Pick