Democratic lawmakers are planning to bring Dreamers to President Trump’s State of the Union address on Tuesday, an effort to urge him to find a solution for the undocumented immigrants who were brought to the U.S. as children.

Trump announced in September that he would end Deferred Action for Childhood Arrivals (DACA), an Obama-era program that shielded undocumented immigrants brought to the U.S. as children from deportation. DACA recipients, who are often called Dreamers, have spent months facing uncertainty as lawmakers struggle to negotiate a deal for the program. An immigration plan proposed by Trump last week was criticized by both hardline conservatives and immigrant rights activists for the concessions it made to either side.

Members of Congress often bring guests to the State of the Union who are affected by issues that are important to them, including immigration, health care, military spending and sexual harassment. At least 24 House Democrats are bringing a Dreamer to watch Trump’s address, ABC News reported, citing a list from a congressional official.

These are the Democrats who have announced the Dreamers who will be joining them so far:

Denea Joseph, a DACA recipient, will attend the State of the Union with Harris. “I truly believe that we will win, we will win the fight to ensure that immigrants like myself are equipped with the rights to live and contribute fully,” Joseph, communications coordinator for the UndocuBlack Network, said in a statement. “The time is now to pass a Clean Dream Act that doesn’t use undocumented youth to criminalize the original ‘Dreamers’ — our parents and grandparents.”

Esli Becerra, a 26-year-old Dreamer who arrived in the U.S. at 8 months old, and his brother, Kevin Becerra-Segura, who was born in Oregon, will join Wyden at the State of the Union. “I love this country and just want to continue contributing to my community, my employer and my family without fear and uncertainty,” Becerra said in a statement on Monday.

Wyden was initially bringing Daysi Bedolla, a DACA recipient and the student body president at Eastern Oregon University, but there was a last-minute change.

Dreamer Leonardo Reyes will be at the U.S. Capitol on Tuesday with Merkley. “As President Trump addresses Congress next week, he will look up and see the young leaders he has promised to treat ‘with great heart’—and he will see that we are determined to hold him to that promise,” Merkley said in a statement.

Curbelo will attend the address with Adrian Escarate, a DACA recipient who was brought to the U.S. from Chile when he was 3.

Ana Campa Castillo, who was brought to the U.S. from Mexico when she was 6, will attend the speech with Foster. “I know firsthand how difficult it is for DREAMers to imagine leaving one of the few places they have called home,” Castillo, — a student at Joliet Junior College in Joliet, Illinois — said in a statement. “It’s not surprising that President Trump rescinded DACA, but it’s a decision that calls on us to empower people like me to speak up and work for a solution.”

Nicolle Uria — a high school senior who immigrated to the U.S. from Bolivia with her family when she was 1 — will be Connolly’s guest. “Nicolle is a bright, talented student who until last September lived the American Dream,” he said in a statement. “She was looking forward to going to college and to run her own media company one day, until President Trump put that future in jeopardy with his callous decision to end DACA.”

Blumenauer announced that he would be boycotting the speech, but sending a Dreamer in his place “to remind Trump that these are real people with families and jobs, who are vital to our communities. They deserve certainty and protection.” Aldo Solano, a Portland Community College student from Mexico, will attend instead.

Miriam Vargas Corona, a Dreamer brought to the U.S. when she was 9 months old and who now lives with her husband and 7-year-old son, will join Bonamici at the State of the Union address. “Not having protection against deportation is terrifying. Being forced to plan for a potential separation from my child and husband is something that I do not wish for any parent,” Vargas Corona said in a statement. “It is deeply heartbreaking to mentally prepare yourself to not see your child grow up and be there for all his defining milestones.”

Schrader has invited Juan Carlos Navarro, a graduate student at Oregon State University who has received treatment for cerebral palsy in the United States, according to the Oregonian. Schrader shared Navarro’s story on the House floor in November, while advocating for legislation that would protect immigrants like him from deportation.

Hugo Alexander Acosta Mazariego, a Dreamer whose family moved from El Salvador in 2005, will attend the address with Lowey. “I want to be clear: Dreamers are Americans,” Lowey said in a statement. “They contribute to our economy, our communities, and our strength and stability as a nation. Hugo is no exception.”

Leo Salinas Chacón, a Dreamer who is currently studying economics and Spanish at the University of Louisville, will be Yarmuth’s guest on Tuesday. “I’m thrilled to welcome Leo as my guest for this address and I’m glad to know that he will be among those staring back at this President, reminding him that we are a nation built by and for individuals of all ethnicities and nationalities, representing every race, color, and creed,” Yarmuth said in a statement.

Chu invited 23-year-old Dreamer Jung Bin Cho, who immigrated to the U.S. from South Korea in 2001, to the State of the Union. “I invited Jun Bin so that Trump could see the face of immigrants today,” Chu said in a statement. “Dreamers have known no home but America. They have contributed through school, work, or military service. And they’ve stayed within the law. Deporting them now would be both cruel and counterproductive, causing serious disruptions to families and communities alike.”

Correction: The original version of this story misstated Jeff Merkley’s title. He is a U.S. Senator from Oregon, not a member of the House. 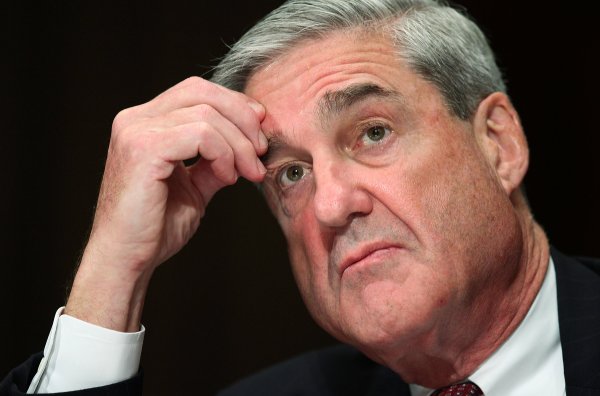 What's Next For The Bills That Would Keep Trump From Firing Mueller?
Next Up: Editor's Pick