Lorde may not have taken home any of the top prizes at Sunday night’s Grammy Awards, but she still aced the night.

The artist was in the spotlight after skipping the red carpet and the stage when she did not give audiences a solo performance nominated album, Melodrama, unlike the other album of the year nominees, who were all men.

But Ella Yelich-O’Connor, a.k.a. Lorde, proved that she didn’t need to say a word to make her feelings about the night known. While many attendees wore white roses to show solidarity with the #TimesUp movement, Lorde arrived at the show wearing a red dress adorned with an excerpt of artist Jenny Holzer’s Inflammable Essays on the back of her dress, which she posted on Instagram. “My version of a white rose — THE APOCALYPSE WILL BLOSSOM — an excerpt from the greatest of all time, jenny holzer,” Lorde wrote in her caption.

That wasn’t her only accessory, though. Lorde paired her red dress with a matching flask, which she used to applaud the many, many men who took home awards. The internet fell in love with the image, calling Lorde both a “mood” and a “true queen” for her fashion statement, which made her feelings known, without saying a word. 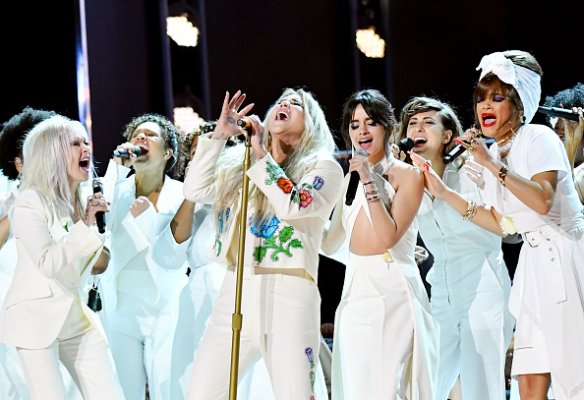 Kesha Shares Heartfelt Thank You After Her Tearful Grammys Performance
Next Up: Editor's Pick