I Use My Phone While I Breastfeed. I'm Not a Bad Mother

I often have my phone in my hand while breastfeeding my one-year-old daughter. This isn’t a confession, because I don’t feel guilty about it. Even though there are lots of people implying that I should.

For example, at a research forum hosted by Children and Screens: the Institute of Digital Media and Child Development, while researching my new book on screen time, I saw a video of a psychological experiment. You can find it on YouTube. I challenge you to watch it without getting a lump in your throat. An infant is strapped into a seat. His mother leans toward him, smiling, widening her eyes, playing peekaboo and this-little-piggy. He squeals, responding to her coos in the kind of baby conversation that is crucial to the development of speech and healthy attachment.

Then the mother turns away for a moment. When she turns back, her face is set in a blank expression.

Edward Tronick at the University of Massachusetts Boston has been conducting these “still face” experiments since the 1970s. He uses them to model the effects of neglect and maternal depression, especially postpartum depression, which affects about one in 10 women. He’s found that repeatedly denying children opportunities to connect can cause severe distress. Adherents of “attachment parenting,” a relatively extreme parenting ideology that advocates co-sleeping, extended breastfeeding, and babywearing, have cited his research to emphasize the need for constantly responsive, attentive care.

These days “still face” research is being used to ask what damage parents may be doing with phones constantly in their hands. When I saw the video I flashed immediately on my own moments gazing impassively into the black mirror of my smartphone in my young daughters’ presence.

Here’s what happens. The baby makes a series of bids for his mother’s attention. Smiling, giggling, squealing, arching his back, clapping his hands, reaching for her, pointing — pulling out his whole baby bag of tricks. Her face is like stone. He looks confused then, starts biting his fist uncertainly, twists around to peek at the researcher. Stress hormones are skyrocketing in his little body, and his pulse is racing.

Finally he slumps in his seat and starts to wail, red-faced, and his mother breaks her expression and comforts him. It’s only been a few minutes, with no discomfort, no scolding. A four-month-old baby seems to remember this brief experience up to two weeks later; if you recreate the situation, they will freak out much more quickly.

I don’t happen to be depressed, and my daughters don’t appear traumatized by my phone use. Just last night, my baby girl started beating on my breastbone while she was latched on and I was updating Facebook. I looked her in the eye, and realized she was smiling and wanted my attention. So I gave it to her.

Our increased absorption in screens certainly brings tradeoffs that we can feel in all our relationships. As Temple University developmental expert Kathy Hirsh-Pasek put it in the abstract of a recent paper: “the advent of mobile technology means that parent-child exchanges are often fraught with unpredictable interruptions.” Other small observational studies have documented parents responding “in a somewhat robotic manner,” “harshly” and “inappropriately” to children when distracted by devices, as we often are. One paper even argued that emergency room admissions for young children went up with the advent of the iPhone. And that’s to say nothing of the recent rise in car fatalities, which many are linking to the scourge of texting and driving. Car crashes have long been the leading cause of death for children, and there’s no data to indicate that parents are particularly good at putting down their phones when children are in the back seat.

I think this research is worth paying attention to. So why do I argue against shaming mothers like myself, who habitually use devices in front of their children?

Because shaming is not likely to be effective.

And because the act of deploring parents’ media use is a nasty, centuries-old tradition. It’s fueled by an ideological stance that judges parents, especially mothers, for not being fully available to their children at all times, and that scapegoats working mothers in particular.

Most mothers work for wages. Most of us do most of the childcare too. Most use their smartphones as a necessary extended umbilical tether between one setting and the other. We must be reachable by our children’s caregivers while working, and we often must be reachable by colleagues, clients, bosses and other family members while at home. This feeds the habit of constant connectedness. Thanks in part to mobile technologies, two-thirds of people tell Gallup pollsters that time spent on work outside regular working hours has increased significantly in the last decade. We need to be two places at once, and like a witch’s curse, the smartphone allows us to be — at the cost of being half a person everywhere.

Is this set of social and economic relations my fault? Is it Apple’s or Samsung’s fault? The repetitive logic of moral panic casts new media again and again as threats to the domestic sphere and women’s virtue. In the mid-19th century, Madame Bovary’s mother-in-law resolved “to prevent Emma from reading novels” on account of their corrupting influence. A few decades later, novels and newspapers told stories of young women working as “telegraph girls” who fell into inappropriate courtships “along the wires.” Cars and telephones in their time were seen as offering young mothers in the suburbs dangerous degrees of freedom. In recent decades, as both imported and domestically produced soap operas gained audiences around the world from Malaysia to Indonesia to India and Brazil, state authorities and conservative critics have raised alarms about the depictions of sexuality and spirited heroines giving women inconvenient ideas. The media changes, but the argument stays the same.

I currently nurse my one-year-old for about two hours a day. I also work full time and raise an older child, as well. I guess the attachment parenting ideal is that if I didn’t have my smartphone, I’d be gazing raptly into her eyes all that time, singing nursery rhymes. Actually, I probably would have quit breastfeeding by now if I couldn’t multitask. It’s not at all ahistorical or strange for mothers to participate in society beyond their roles as caregivers — that’s as common as milk. What’s unusual about this country and this time is the fanatical asceticism, this insistence on the intensity and primacy of constant attention and connection between mother and child, yet with so little social structure in place to support it.

Tech distraction is a looming public health problem with long-term solutions that likely include regulation and greater public awareness. It is also a private, intimate problem that you must address yourself, ideally today. Our children’s needs are bottomless and primal, and yet we parents also need — even deserve — some time to live as ourselves and connect with others. I contend, borrowing the words of family therapist Esther Perel, that this is less a problem to be solved than a paradox to be managed.

Put down your phone around your own children, if you can and when you feel you ought to. But don’t presume to tell me or other mothers what to do with their own lives, or lifelines.

Adapted from The Art of Screen Time: How Your Family Can Balance Digital Media and Real Life by Anya Kamenetz. Copyright © 2018. Available from PublicAffairs, an imprint of Perseus Books, LLC, a subsidiary of Hachette Book Group, Inc. 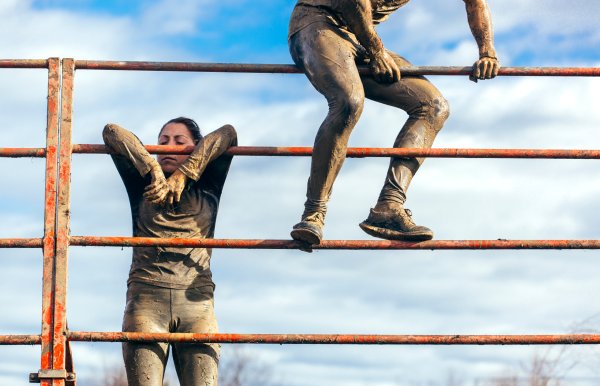 Why Even the Best Marriages Are Hard Sometimes
Next Up: Editor's Pick