Recording Academy President Neil Portnow said that women who want to be part of the industry need to “step up,” after only one woman took home a main award at Sunday night’s Grammy Awards.

“Because I think they would be welcome,” he continued. “I don’t have personal experience of those kinds of brick walls that you face but I think it’s really a combination. Us as an industry making the welcome mat very obvious, creating mentorships, creating opportunities not only for women but all people who want to be creative and really paying it forward and creating that next generation of artists who feel like they can do anything, they can say anything.”

When Variety asked Grammys producer Ken Ehrlich the same question, the veteran television producer said: “It’s not for me to talk about. I produce the TV show.”

Ehrlich was also asked why the only female artist nominated for Album of the Year, Lorde, wasn’t given a solo performance at the Grammys. The other nominees in the category, Bruno Mars, Childish Gambino, Jay-Z and Kendrick Lamar, all performed Sunday night.

“I don’t know if it was a mistake,” Ehrlich said. “These shows are a matter of choices. We have a box and it gets full. She had a great album. There’s no way we can really deal with everybody.”

Canadian singer Alessia Cara won the Grammy for best new artist, making her the only female nominee to win one of the major Grammy categories — despite the fact that SZA was the most-nominated woman of the night with five separate nods. Four out of five nominees in the Best Pop Solo Performance category — Kelly Clarkson, Kesha, Lady Gaga and Pink — were women, but all lost to Ed Sheeran’s “Shape of You.” 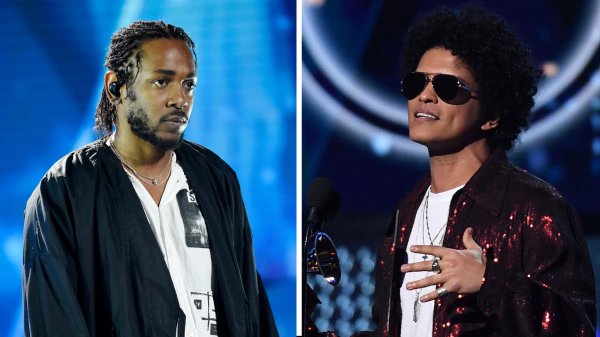 The Internet Is Not Happy Kendrick Lamar Lost Album of the Year at the Grammys — Again
Next Up: Editor's Pick